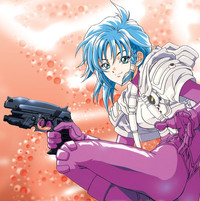 Crunchyroll has announced the addition of English subtitled and dubbed versions of  DNA^2 to its catalog of streaming anime. The 1994 Madhouse/Studio Deen production adapts a sci-fi rom-com by Masakazu Katsura (I"s, Zetman, original character design on Tiger & Bunny).

Junta has a problem: He's deathly allergic to girls! All this changes with the arrival of Karin, a gorgeous time-traveler who transforms him into the Mega-playboy, the sauciest girl-magnet around. Suddenly, Junta's wildest dreams have come true, and all the prettiest girls in school have fallen in love with him. With so many adoring fans, mayhem is sure to follow, and Junta finds himself in the center of one hilarious romantic mishap after another.

The complete series is now available to premium members. Free members will be able to start with the first five episodes today and will be getting 5 additional episodes for the next couple weeks. Regional availability includes US and Canada.

The series is being released on North American home video by Discotek Media.