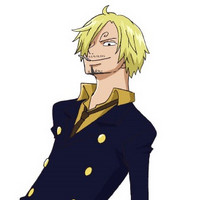 On his birthday, March 2, Netflix's official Twitter for the upcoming One Piece live-action series asked fans in eight languages their top five actors who should play Sanji.

Happy birthday #Sanji!????Who are your top 5 picks to play #TheRealSanji? An unknown? A big star? ????????? In his honor, please answer only with your feet. #OnePiece @NXOnNetflix

The live-action adaptation project produced by Marty Adelstein (Prison Break) at his Tomorrow Studios was first announced back in 2017, and Matt Owens (Agents of S.H.I.E.L.D.) was introduced as its main screenwriter in July 2019, then Steven Maeda (CSI: Miami, Lost) also joined in January 2020.. The One Piece manga's original author Eiichiro Oda has joined as executive producer. Its ten-episode first season's streaming schedule has not yet been finalized.

Message from Eiichiro Oda for the live-action series posted on January 30, 2020: