We sling the 'double gun device' in all three shooting styles 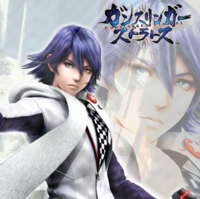 April 4th was the first day of location testing for Gunslinger Stratos, the upcoming third-person shooter arcade game from Square Enix and By King. I wandered down to Taito Station in Akihabara to check out the beta. 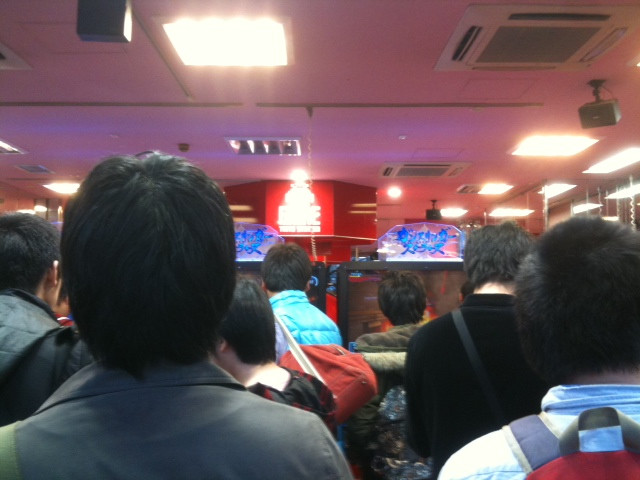 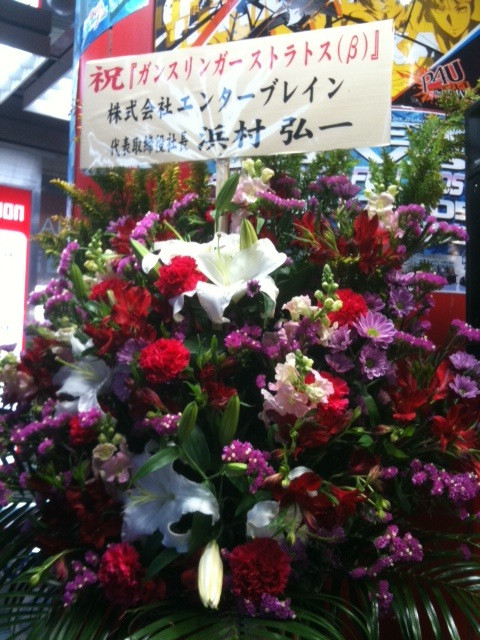 Taito Station, Akihabara while I was there. Left: The back of the line.  Right: Congratulatory flowers from Enterbrain.

If you missed the Gunslinger Stratos trailer, you might want to start there, but the gist is that Square Enix and By King want to get your adrenaline pumping with 4 x 4 gun fights in destructible environments like the one I got to play in, Shibuya, Tokyo. 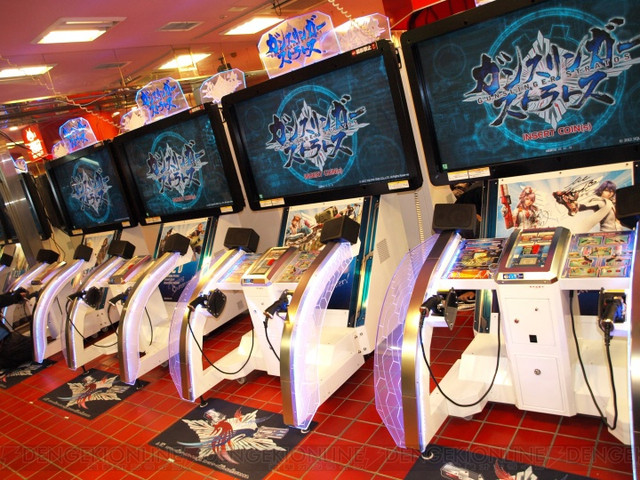 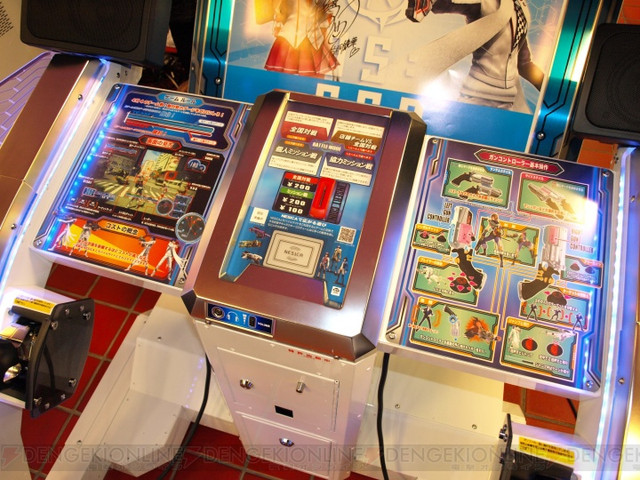 The basic controls are easy enough to grasp, but maneuvering skillfully will no doubt take some practice. Each gun has a analog stick—the left one moves your character, and the right one adjusts your target or camera. There is also a jump button on the right gun that you can double tap and hold to fly for a limited time. Each character has four different attacks: one for each gun when dual-wielding, one for side style (when you connect the guns horizontally) and one tandem style (when you connect the guns vertically). The guns connect via magnets pretty smoothly (in fact, you have to tug a bit to detach, if anything), so I didn't have any problem switching firing styles and the game responds automatically by changing your weapon.

Maybe it's better to explain via my actual experience. 200 yen got us two rounds. They had two sets of four machines lined up back-to-back in the storefront to achieve the 4 x 4 battles, so the line actually went pretty quickly. My first try I used the character Jonathan Sizemore (click through to see a video on the official site). He's a 15-year-old who fights in a giant battle suit he built himself. 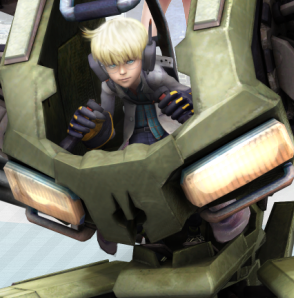 Left - Iron Ball Hammer Gun Lv. 3; it's a melee attack that feels a little like a wrecking ball yo-yo, but it's also pretty slow.

Overall, this is not really a character that suits my playstyle. The suit gives him more than double the hit points of most others, but it also makes him slow and a huge target.

I waited through the line again to try someone a little more lightweight and settled on Kyoka Katagiri. She's 16 and you don't want to get on her badside. 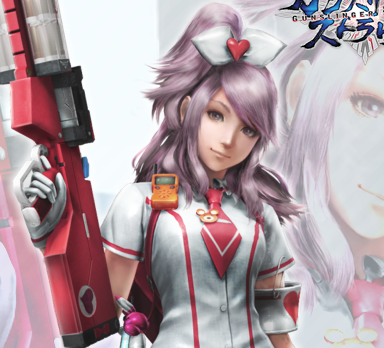 Left - Area Shield Lv. 2; your teammates can also come inside.

I wouldn't recommend her for a beginner since, as a healer, she has low HP. You really need to have your skills together to not get destroyed on your way to saving your friends.

Overall, I liked the crumbling environment, but sometimes it seemed like the trucks in the road were really only there to be exploded, rather than to add realism. I guess that can be said of most games, though. In terms of controls, the reload mechanic seemed somewhat unclear to me and the camera was a little hard to get the hang of. I definitely didn't look as cool as the demo videos, although I did have one pretty epic mid-air death... 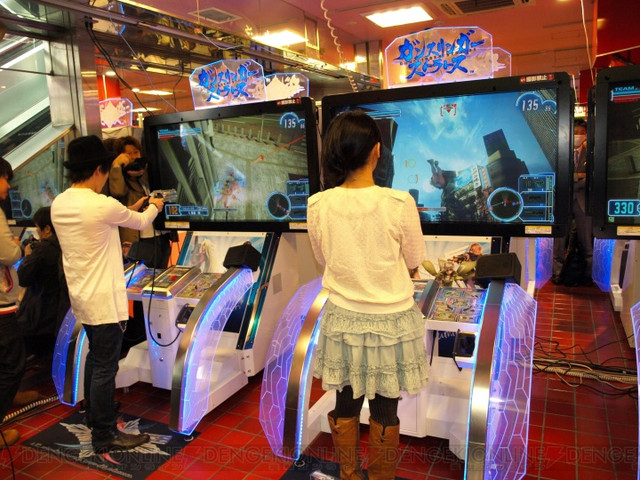 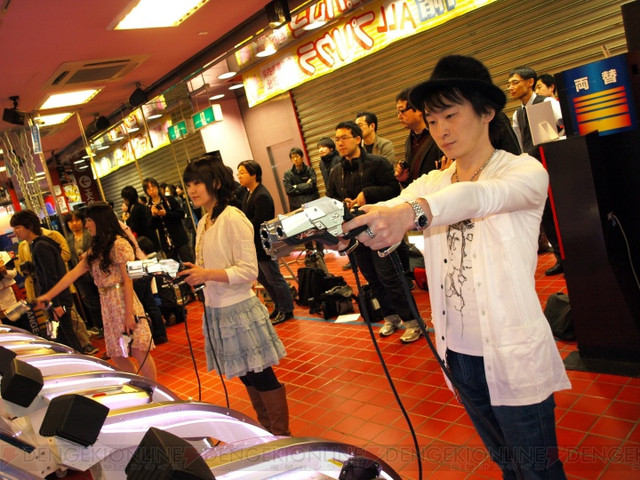 Without a doubt the most popular character was Sidune Rindou. While I was watching and playing there were often times where over half of the 8 players were using her. Luckily you can still tell friend from foe via reticle coloring in the targeting system. 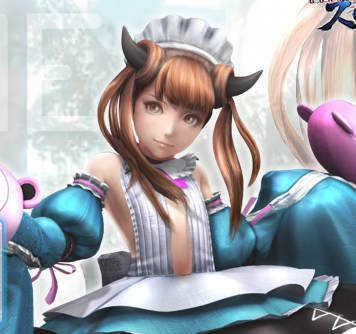 Is it the maid outfit or the flamethrower?

Gunslinger Stratos can be beta-tested through April 8th in Akihabara. If you take the survey after playing 5 times, you can get a keychain or custom arcade card. After 10 times, you can get a t-shirt. After this test, the game is headed to Osaka before returning to Tokyo (Ikebukuro) later this month. Check the official site for details if you're in the area; otherwise, expect a [Japanese] arcade release this summer!