Technically, due to time zones, the most popular anime in Australia...is from the future! 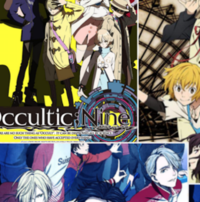 What new simulcasts are exciting the anime-watching world? Here at Crunchyroll, we’re here to help you find out!! Below, we have a map highlighting the top new simulcast on our site for every state or territory in the fine country of Australia!!

Already, we’ve shared maps of the United States and Canada, going state-by-state and then province-by-province, but today, without further delay, we’re going down-under to find out how Crunchyroll users in Australia like their anime!! What a handsome map, eh?

The least densely-populated parts of the country are really into Occultic;Nine, a series that didn’t even show up on our maps from the Western Hemisphere!! Occultic;Nine’s frantic pacing and colorful characters seem to have taken the hearts of these sparse territories’ residents, and I'm excited by the diversiy the three countries we've explored so far represent.

While Haikyu!! was prominent in the Canadian map, only Tasmania was able to claim the volleyball series as its favorite. Yuri!!! On ICE has been a factor in every country we’ve looked at so far, and while it’s only the lead simulcast in a single state, it’s one of the most populous of the country - I wonder if this is the state with the most ice rinks? After Canada's sports anime domination, it's interesting to see that Australia's most populous regions continue the trend...but I am disheartened to not see Teekyu riding at the top of these sports anime waves!!

Maybe the more politically-inclined in Canberra, Australia’s Capital Region, find Izetta: The Last Witch a more relatable show. As Izetta delvers further into the behind-the-scenes politics of a pseudo-WWII Europe, the ambitious folks in the center of Australia’s governing world seem to be taking interest!!

We were able to make this because of your support! If this is something you want to see more of, please let us know! There's still one more map being prepared as we speak, but your feedback is crucially important. Thank you to all of the Aussies who reached out and look forward to the next CR infographic ~

In case you're not too familiar with the Australian poltiical map, here are the results in plaintext: