Part 2 of the real guide to the fictional history, featuring the Ends, their real life counterparts, and where they overlap! 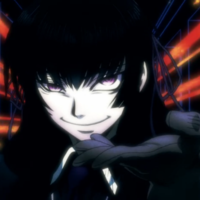 If you read Part 1 of the counterfactual character guide (or watched any Drifters at all) it’s plain to see the characters don’t exactly match up with their historic inspirations. While most of the Drifters vary wildly from their roots, the Ends are a complete 180 on the figures they were in life. I discussed the possible cause for their about face in a previous article, but it’s time to take a closer look at each character to see the strange ways Hirano has bent history and the surprising parts he kept true to life!

Since The Black King has yet to be confirmed, I don't feel it's fair to put him up here. If anyone has any interpretations of the dragonfly staff, though, I'll be watching the comments section. 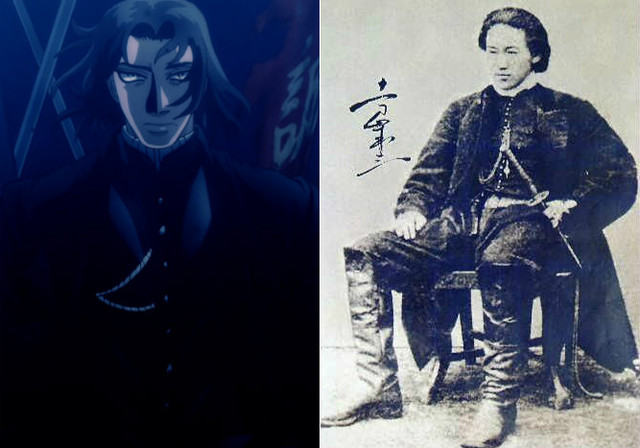 Although Hijikata Toshizo fought on what is popularly considered to be on the wrong side of history, he is considered one of the greatest examples of the samurai ethos. A founding member of the famed Shinsengumi during Japan’s tumultuous Meiji Restoration period. Hijikata became a vice-commander of the organization after exposing corruption among two of its three joint leaders, resulting in their deaths. During the Boshin War, he fought to defend the Shogunate forces seeking to restore Imperial rule. He is most famous for his actions near the end of the conflict. Going into the Battle of Hakodate, Hijikata knew the war had already been lost, and confided that he would fight to die and fall along with the Tokugawa Shogunate. He was killed in battle and Hakodate is considered to be the definitive battle marking the defeat of the Shogunate.

As far as appearance go, Hijikata is probably the most true of life among all the characters in Drifters, from hairstyle to uniform. Seeing as how the only thing he has done up until this point is look as intimidating as possible and bisected a bunch of soldiers, it’s hard to speak to any accurate portrayal of his personality, but he was considered a gifted swordsman so that much seems to be true. The ghosts he summons are dressed in Shinsengumi uniforms, so it looks like he dragged some of his friends along with him who were similarly displeased with the outcome of the Boshin War. Hijikata was killed by a bullet striking him in the spine during his final battle. The difficulty of Easy pulling him out aside, we can probably assume The Black King ended up healing most of the Ends’s horrific injuries. 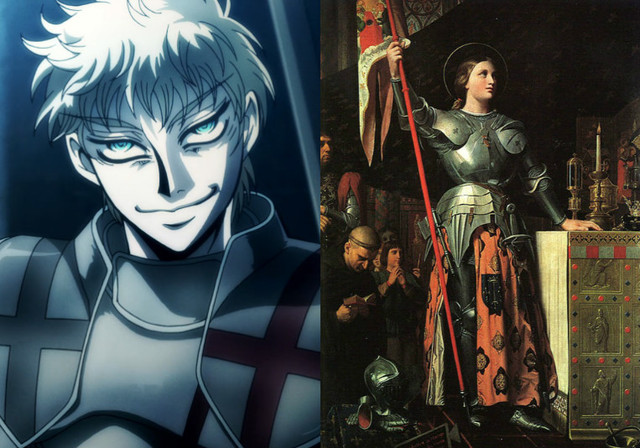 Joan of Arc might be one of the most well-known names in the Western world. Beginning at age 13, she claimed to have received visions from angels telling her to fight for Charles VII in the Hundred Years War. She first gained prominence at the Siege of Orleans, where she was sent with reinforcements just 10 days before the English retreat. Her fame, coupled with her declarations that she was directed by angels to fight for France, transformed a national conflict into a religious war. In battle, she claimed to have never killed a man, instead bearing a banner and inspiring those who fought alongside her. No mention if she favored throwing knives as in the anime. Unfortunately, she was was later captured by Burgundians and put to trial for heresy for, among other things, crossdressing. The court, organized by British Catholics with a vendetta against Joan, found her guilty and had her burned at the stake.

Obviously the yandere pyromaniac we see in Drifters is a radical departure from the Joan of Arc of history. Hirano does take steps to explain the change in personality, however. Getting burned at the stake really changes a person. Joan is insane and obsessed with sharing her unpleasant experience with all mankind. Joan’s execution was, politically driven as it was, extremely public. Historical accounts have her remains being burned several more times, perhaps because they were worried it wouldn’t keep, so even getting pulled out by Easy at the last possible moment would probably raise some questions about the suspicious lack of bones in the remains of the pyre. 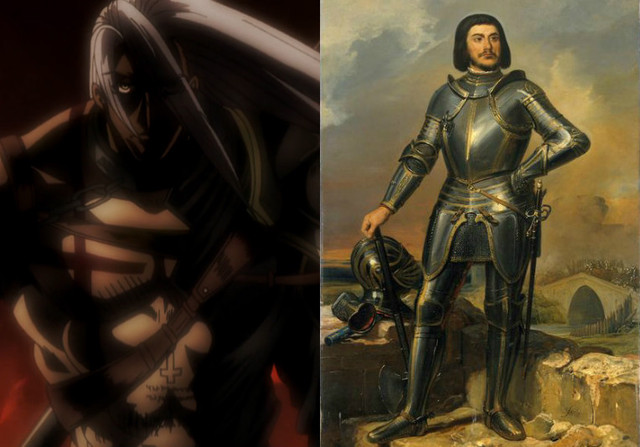 Born Gilles de Montmorency-Laval, Gilles was French nobleman and knight who fought alongside Joan of Arc, most notably during the Siege of Orleans. Although his name isn’t quite a recognizable as Joan’s in Western nations, he has a habit of showing up alongside her in Japanese fiction. After Joan’s execution, Gilles lost a great deal of his fortune funding unsuccessful theatrical productions and was later convicted as a serial killer of children. It’s believed that, like Joan, the trial was also politically motivated. At the very least there was a great conflict of interest as Gilles prosecutor, The Duke of Brittany, who inherited all of Gilles’s lands after his execution. Still, it’s hard to shake that kind of reputation, and Gilles is believed to be the inspiration for the fairytale “Bluebeard” which may clear up some questions people have about an entirely unrelated anime.

Gilles de Rais is perhaps the most flattering portrayal among the Ends, a tragic knight so dedicated to Joan that he would follow her into the very depths of hell. A wonderfully ironic decision since Hirano also assumed the worst about Gilles when it came to the alleged murders. In a flashback it is heavily implied that he did indeed kill all those children knowing that, since Joan was burned at the stake, she was condemned to hell, and deciding to sin enough that he would follow her. Although, by historical account, Gilles wasn’t even present for Joan’s execution. Like Joan, Gilles had a very public execution in which he was first hanged then dropped into a pyre and his remains collected. Once again, Easy had her work cut out for her. 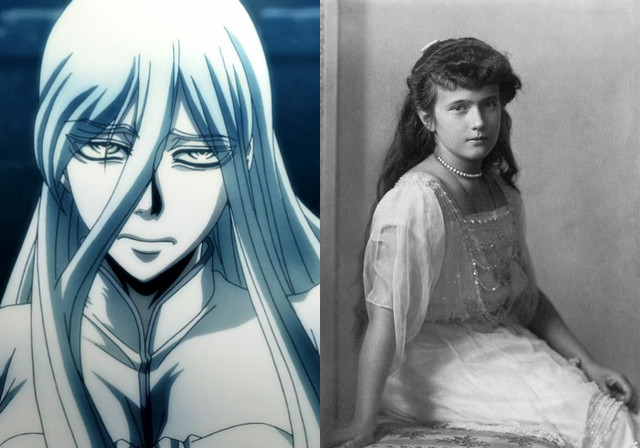 Despite her royal status and popular media portrayals, Anastasia and her sisters were raised simply and without extravagance while away from the public eye. Anastasia was described as among the most active of her sisters despite numerous health issues during her early childhood. During the Russian Revolution, her father, Tsar Nicholas II, abdicated the throne and the Romanovs were put on house arrest and moved to Siberia then finally Yekaterinburg during the tumultuous political period that followed. During the later civil war, as the anti-Bolshevik forces approached Yekaterinburg, the Bolsheviks executed the Romanovs by firing squad rather than allow them to fall into the hands of the White Army. Likely due in part to the lack of remains, Anastasia’s popularity, and wishful thinking, rumors of her survival lasted for decades after the death of the Romanovs, causing a number imposters to attempt to claim Anastasia’s identity.

Hirano pursued the less optimistic assumption that Anastasia was indeed killed along with the rest of her family, or at least near enough that Easy could squirrel her away. Like Joan, Anastasia’s robotic portrayal in Drifters is a dramatic departure from historical accounts. In life she was considered cheerful, energetic, and mischievous to the point of being called a devil by her caretakers. Although the entire royal family was known to have grown morose and fatalistic in their captivity, Anastasia kept up her family’s morale. While the possibility of her survival was a popular theory for decades, making her an ideal candidate for an End,her death has since been forensically verified. We can give Easy the benefit of the doubt and assume she can fake such things. 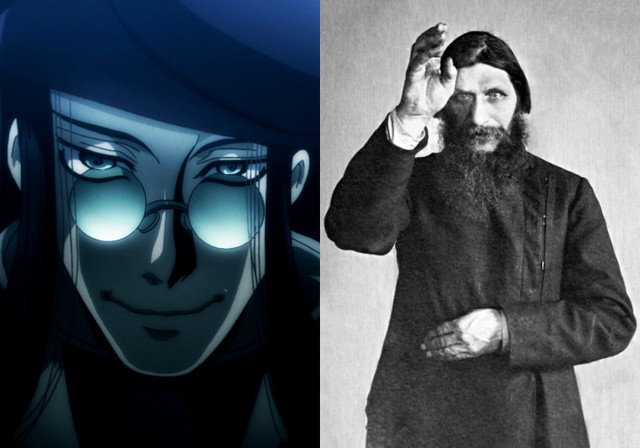 In both life and death, Rasputin has been a controversial figure. A Russian Orthodox mystic, Rasputin gained national prominence in Russia after healing Tsesarevich (Prince) Alexei of medical complication brought on by his hemophilia. After the miraculous healing, Rasputin enjoyed a close relationship with the royal family that caused a growing resentment among the nobility. Numerous rumors rose about his relationship with the women of the Romanov family. Despite his reputation, he seems to have altruistically used his influence, advocating for the Jewish population in Russia and, during WWI, counselling Tsar Nicholas II against involvement. After refusing bribes by the Prime Minister Alexander Trepov to remove himself from politics, Rasputin was assassinated during a housecall.

Maybe the greatest counterfactual representation of a historical figure in the Drifters just based on appearances, with Rasputin taking a few decades off his complexion and adopting a beatnik bishonen persona. Given Rasputin’s reputation as a mystic, he almost certainly has access to some form of magic in the Drifters universe. So far his character has fallen into one of Hirano’s favorite archetypes of the grinning, enigmatic servant, but Rasputin may at least have one of the greatest vendettas among the Ends. In addition to his assassination, it must have been more than a little upsetting to see Anastasia in this new world only a year or two older than when he left it. Rasputin was extremely close to Anastasia and her sisters in life. When informed of Rasputin’s death, they had been devastated. It’s not too far to venture that Rasputin would have a similar reaction. Also, no historical mention of visual impairment. 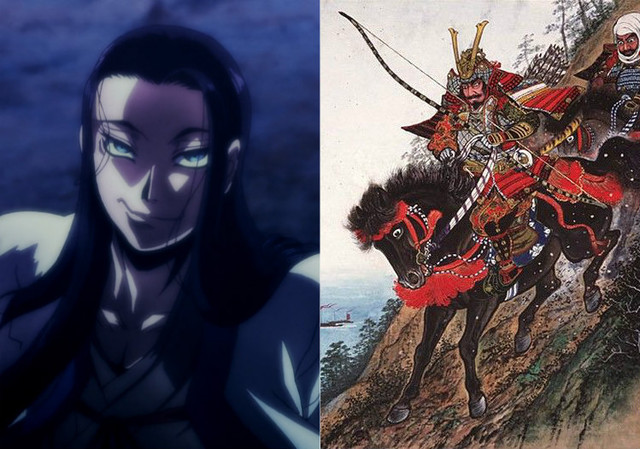 Another prominent character in the Tale of Heiki, Yoshitsune was instrumental in helping his half-brother Yoritomo come to power by defeating the Taira in multiple battles during the Genpei War, making him Nasu no Yoichi’s commanding officer in at least several battles. Like Yoichi, much of the historical accounts of Yoshitsune have been romanticized so it’s become difficult to tell fact from fiction. He was known as a great tactician and an extremely skilled swordsman, winning several notable duels during his career. One of the most iconic tragic heroes of Japanese history, Yoshitsune was betrayed by Yoritomo, who had grown suspicious of his ambition. After fleeing his brother for some time, Yoshitsune took refuge under the protection of Fujiwara no Yasuhira, but was betrayed by Yasuhira as well and forced to commit seppuku.

The Tale of Heike is considered apocryphal on a good day, but evidence suggests Hirano considers the story as downright propaganda. Words used to describe Yoshitsune have been valiant, kind, honorable, brave, and loyal. The Yoshitsune in Drifters is none of these things. The only possible overlap is Yoshitsune’s reputation as a ladies man, which is believable given his appearance in Drifters. Beyond that, he only seems to hang around The Black King to entertain himself. Like the other Ends, being betrayed by his comrades may have left him bitter, but Yoshitsune’s interaction with Yoichi indicates that he hasn’t changed much. There are rumors that Yoshitsune’s suicide was faked, which make for good narrative fuel as an End, but many of the same tales later have him traveling to Mongolia and becoming Genghis Khan, which doesn’t do much for their credibility.

What do you think of Hirano's portrayals of these figures? Any other events, either in the Drifters or the history books, that stands out to you? What does the dragonfly MEAN? Let us know in the comments below!