Mind over Matter: Mob and the Foil, Mogami

Mob Psycho 100 continues to reach for greater heights as it tackles one of the most emotionally complex stories yet! 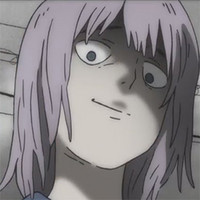 There are days where even if we’ve won the battle, we feel like we’ve lost the war.

I’m talking about the days where you studied hard and you didn’t quite get that grade you were hoping for on your quiz; where you aligned yourself up for a promotion, but it came with huge consequences, or maybe you mustered the courage to asked someone out, and you managed to say it out loud, but it didn’t work out. These are sometimes, the most painful days. You tried your best and somehow, it just didn’t make the cut.

Mob Psycho 100 is ultimately a show about breaking through these kinds of days and focusing on self improvement. It views every day and chance as an opportunity to better oneself, no matter how messy the predicament is. Through its main character, Mob, we’re exposed to a world where a boy’s incredible powers are highly irrelevant to his own image of popularity and confidence. Sure, Mob can wipe out an entire crowd of spirits and perhaps, even people, but at the end of the day, the show, through the suave con man Arataka Reigen, tells us this: being kind is what matters. Empathy and good will precede any other ulterior motive, and the more patient and aware we become of other people’s emotions, the better we can be to them, and help them become better to themselves and others. Kindness pays forward. 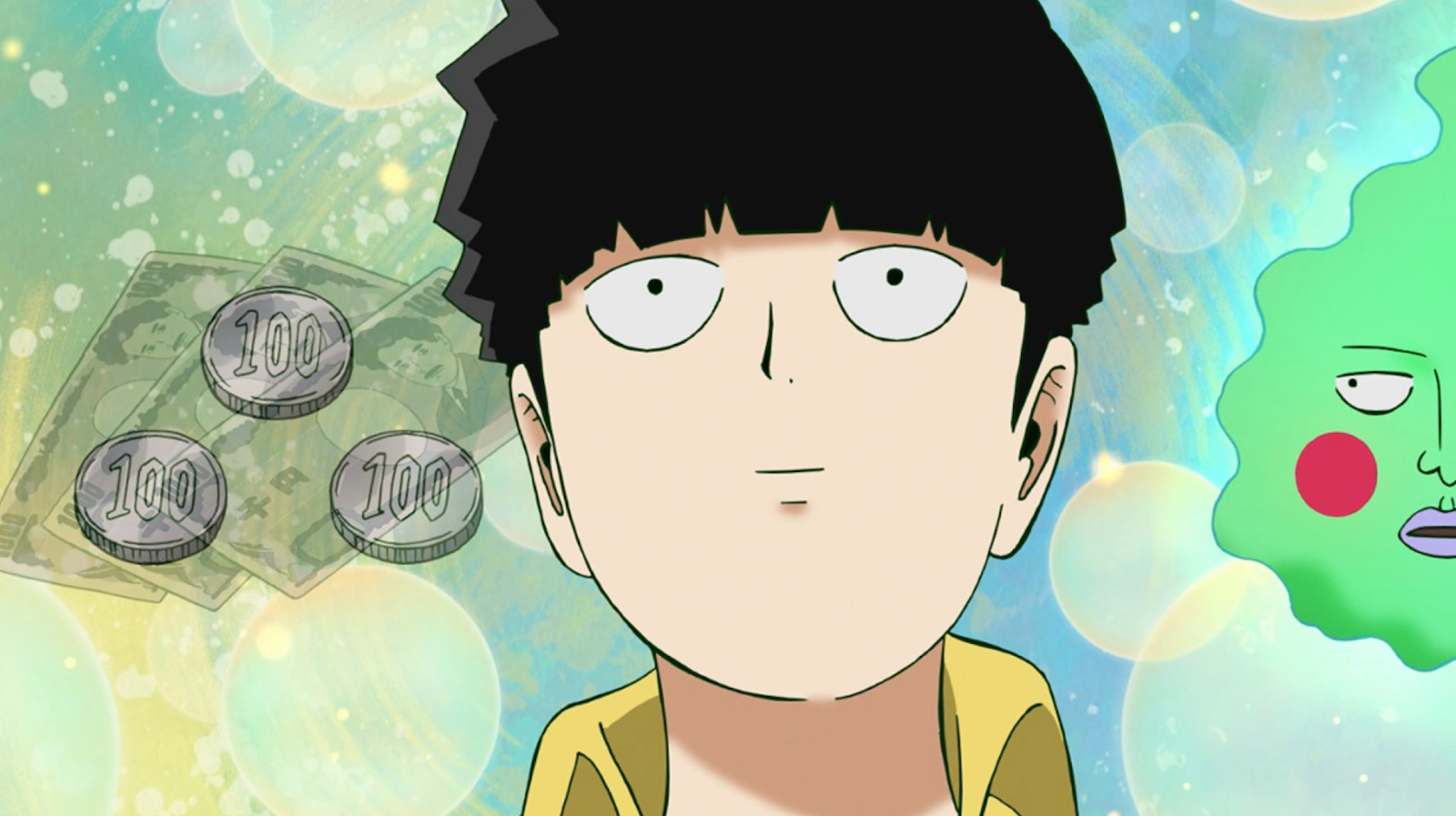 It’s a strong message that hits like a truck every week, but realistically, how long can a mindset like that last? In a world where Arataka Reigens are as rare as they come, and Body Improvement clubs are far more a representation of toxic masculinity than supportive friendships, life can—and will—wear you down. It’s easy to feel lost, unstable, unloved, and alone. Good intentions mean nothing if they aren’t recognized, and what happens if someone like Mob, who is fortunate to have caring people around him, is ripped away from those kinds of positive circumstances?

Mob Psycho 100 cleverly renders this scenario in the form of the Mogami arc, creating the ultimate foil of Mob, Keiji Mogami. Like Mob, Mogami is a being of unmistakable psychic power. He also is intimately aware of the thoughts and presence of those around him; he also once tried to help people and use his powers for good. But unlike Mob, who has a strong support group to guide him through his troubles and empower his growth, Mogami found himself alone, desperate to support his dying mother in the only way financially possible: assassination. Moral corruption encroached his soul to the point where he physically discarded his body and in an attempt to cast revenge on a society (and mother) that disowned him, became a malicious spirit. 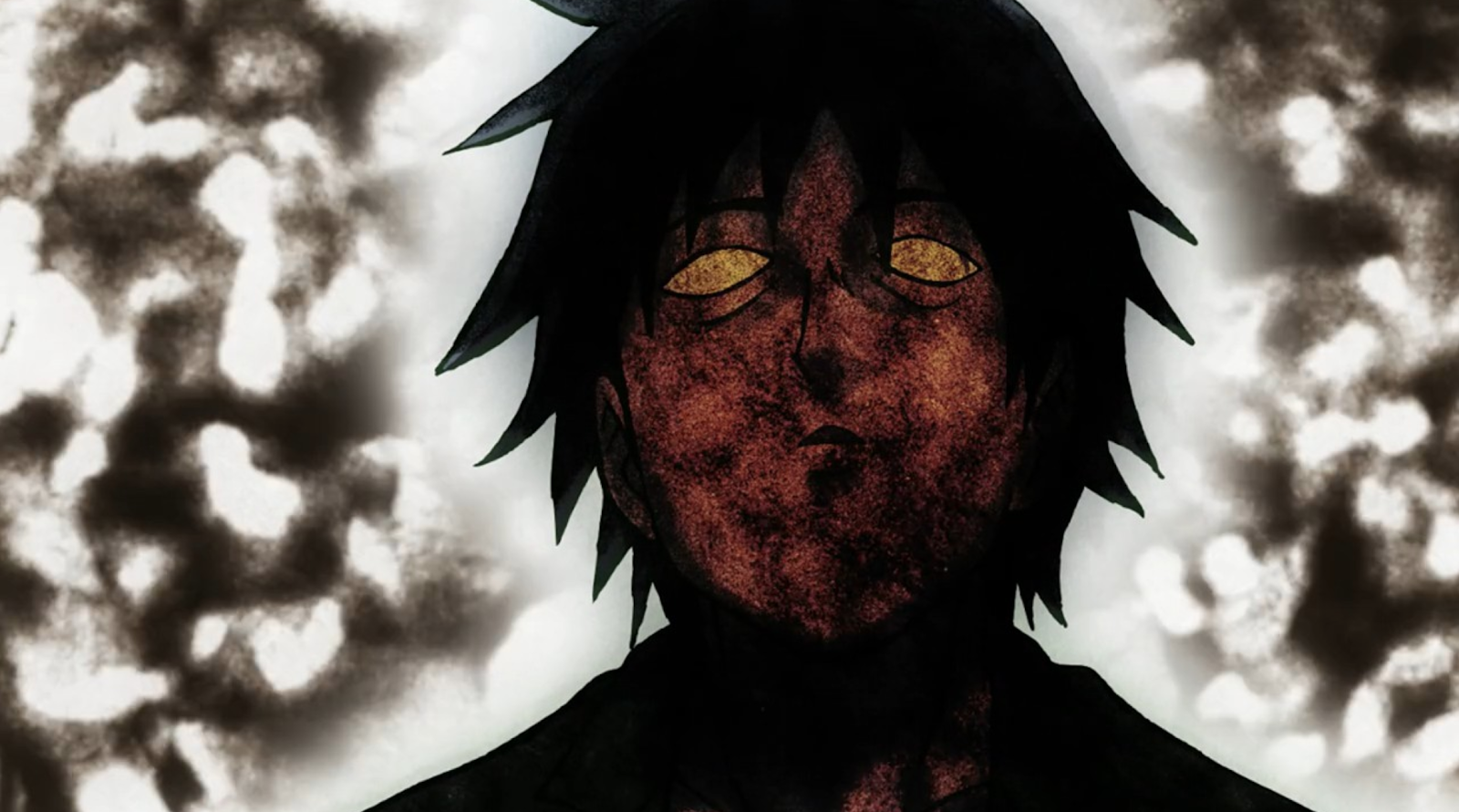 At first glance, Mogami sounds like a typical “tragic baddie gone full villain” story, and that’s not unnecessarily true. He is relentlessly malicious, scheming, and devious, and has no remorse for his actions. In most cases, this kind of behavior would feel trite, especially in a show like Mob Psycho 100, which goes out of its way to consistently poke fun of and flip inside-out the laws of what it means to be a genuine hero. But it’s precisely because Mogami is insidious that his actions, behavior, and mindset carry such a heavy weight; he is the foil of Mob, who represents the ultimate virtuousness, integrity, and patience of humanity. They are both opposite sides of the coin: stemmed from similar circumstances, but completely different in their approach to the world and people around them. One is fueled by bitterness, and the other one is fueled by kindness.

Mob Psycho 100 dives into this dynamic when Mogami traps Mob in a hell of his own making: a world where he has no powers, no supportive family or friends, and no motivation for self improvement. He steals every kind of factor or potential seed for Mob’s growth and turns it upside down, as Mob is physically and mentally assaulted consistently for over six months. It’s a painful sequence of events to watch as our hero is kicked around, thrown food at, and verbally manipulated again and again. Eventually, Mob breaks. He uses his powers to almost destroy his bullies, but is saved by the presence of Dimple, who reminds him of all the people who care about him in the real world. 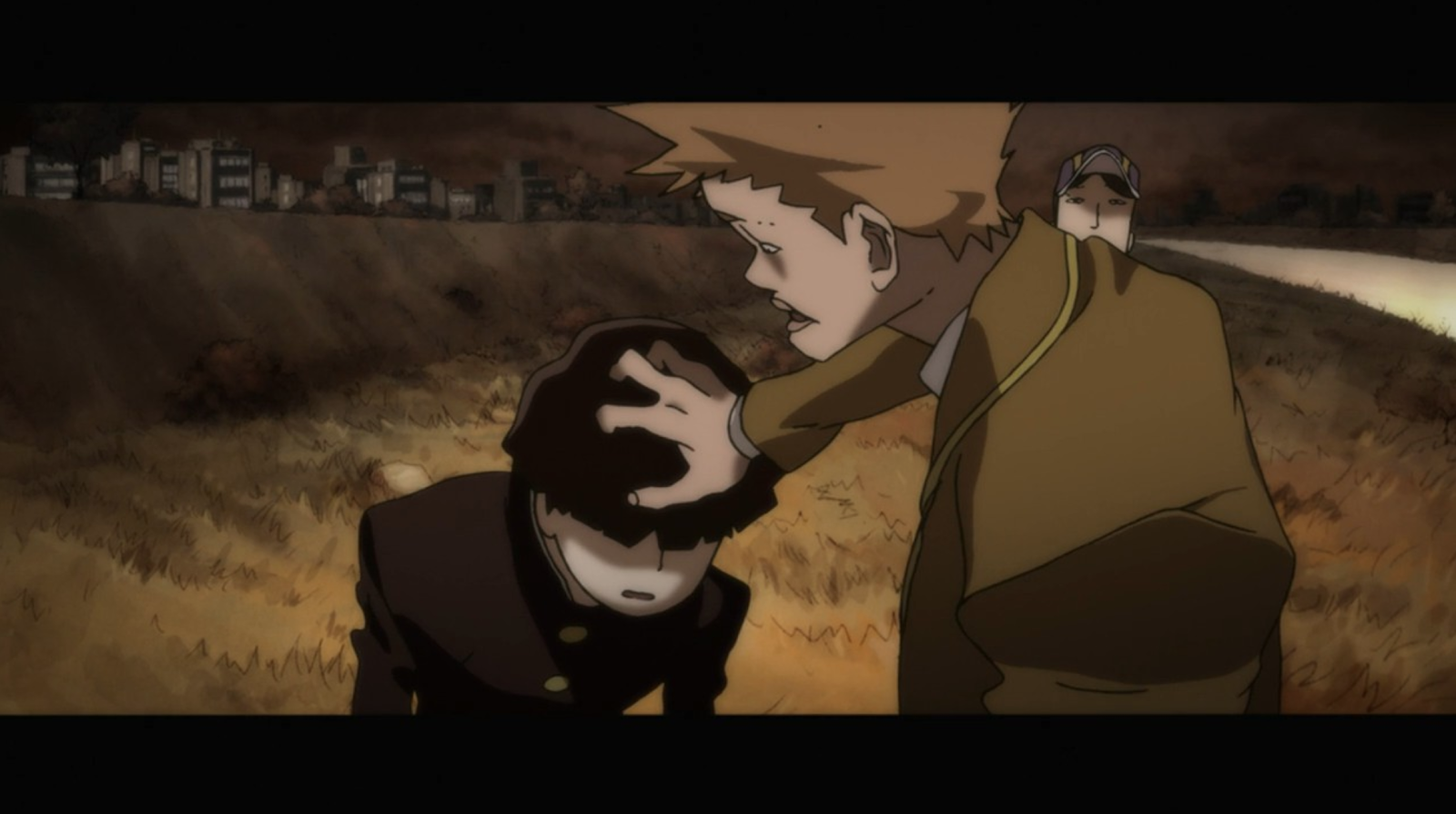 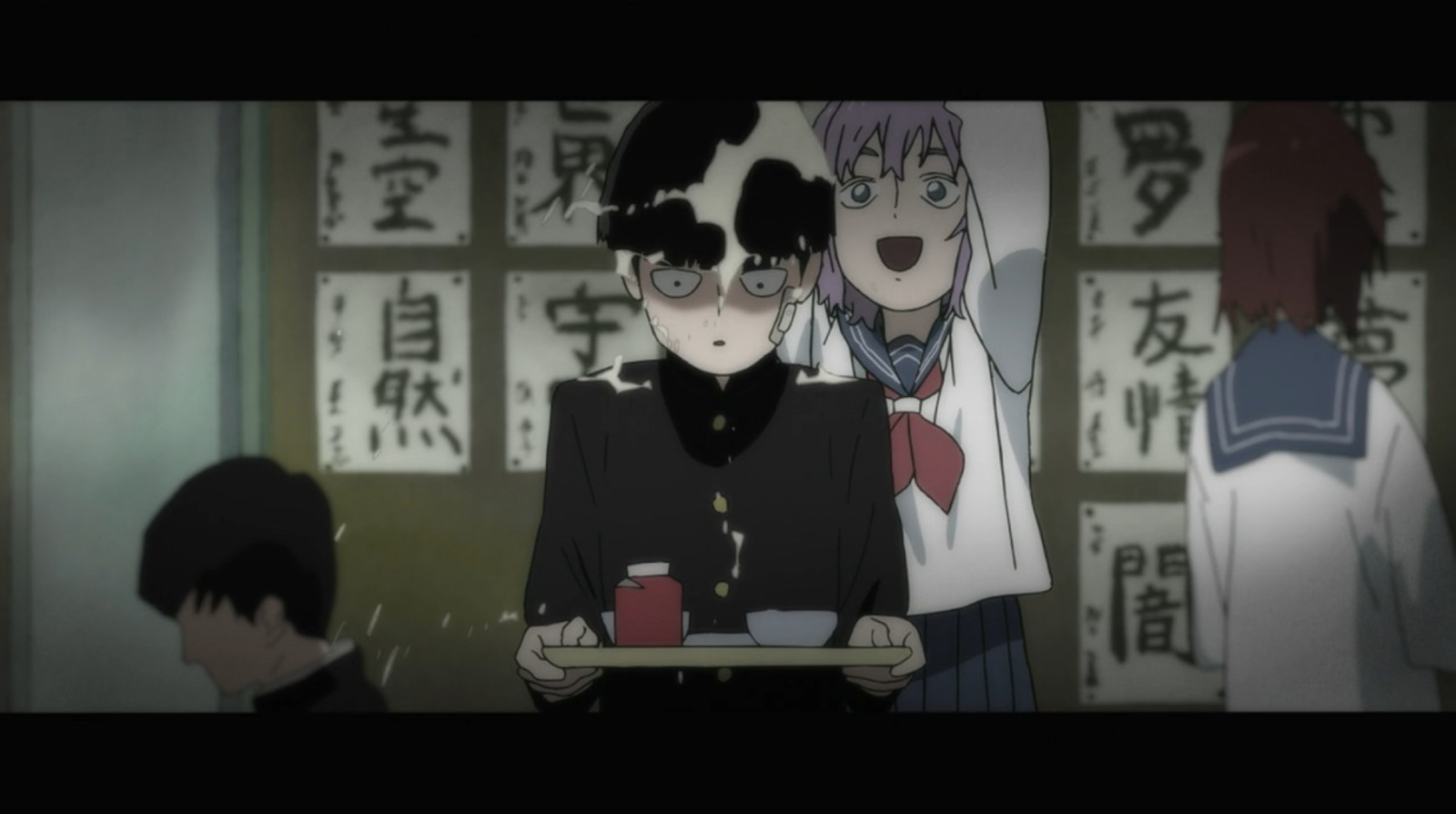 Is Mogami’s theory true? Mob Psycho 100 doesn’t really answer this question, and while it’s left up to the viewer as to whether his treatment of Mob would have made him into a Mogami-esque figure or not, I also think that Mob Psycho 100 realizes that ultimately, that kind of answer doesn’t matter. This is seen in the climax of the arc when Mogami and Mob go head to head with each other in a mental landscape unlike anything we’ve seen before. Red ghosts swamp the screen, flailing miserably as they try to drown Mob in pain and suffering. Buildings fragment into dust. Mob is once again, assailed by negative emotions and maliciousness, but now stemming from the loneliness of a man who only wanted Mob to understand that the world is cruel. It is unforgiving. It does not miss a soul when it fades.

And Mob tears up. Maybe he’s won a battle, but lost the onslaught of the war. Maybe his kindness is not enough. The six months he endured are still very real, and the emotions of hatred and bitterness are still embedded in his heart. And Mogami’s negativity is so very powerful and overwhelming. He almost gives in, but then he realizes: he’s here to save somebody. Maybe all of those things Mogami was saying are true. But here, and now, Mob is capable of doing something good. And he does. Mogami is expelled, but not without telling Mob that maybe he was wrong. Maybe he was right. He’ll be watching Mob, to see if his choice was better. 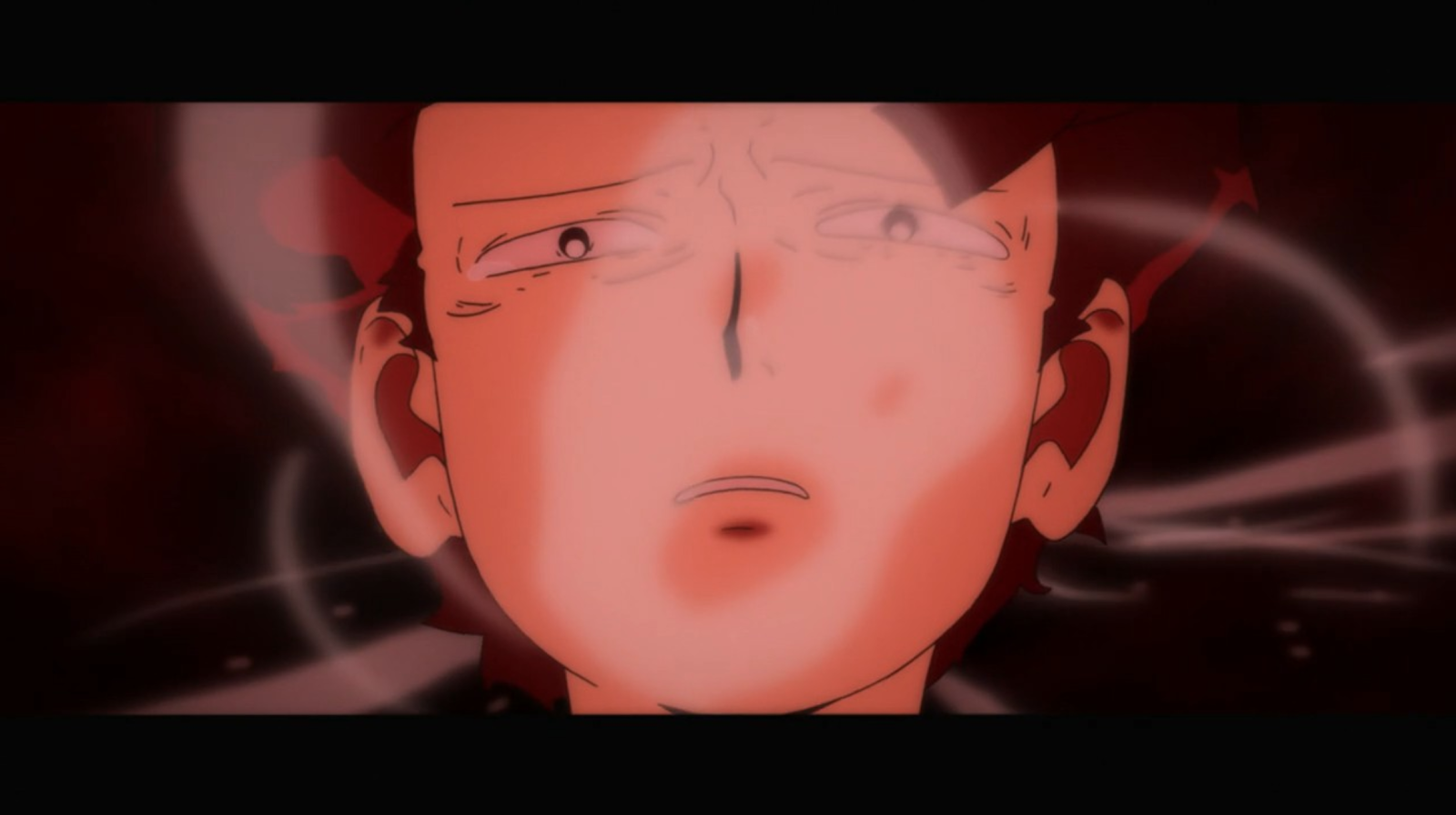 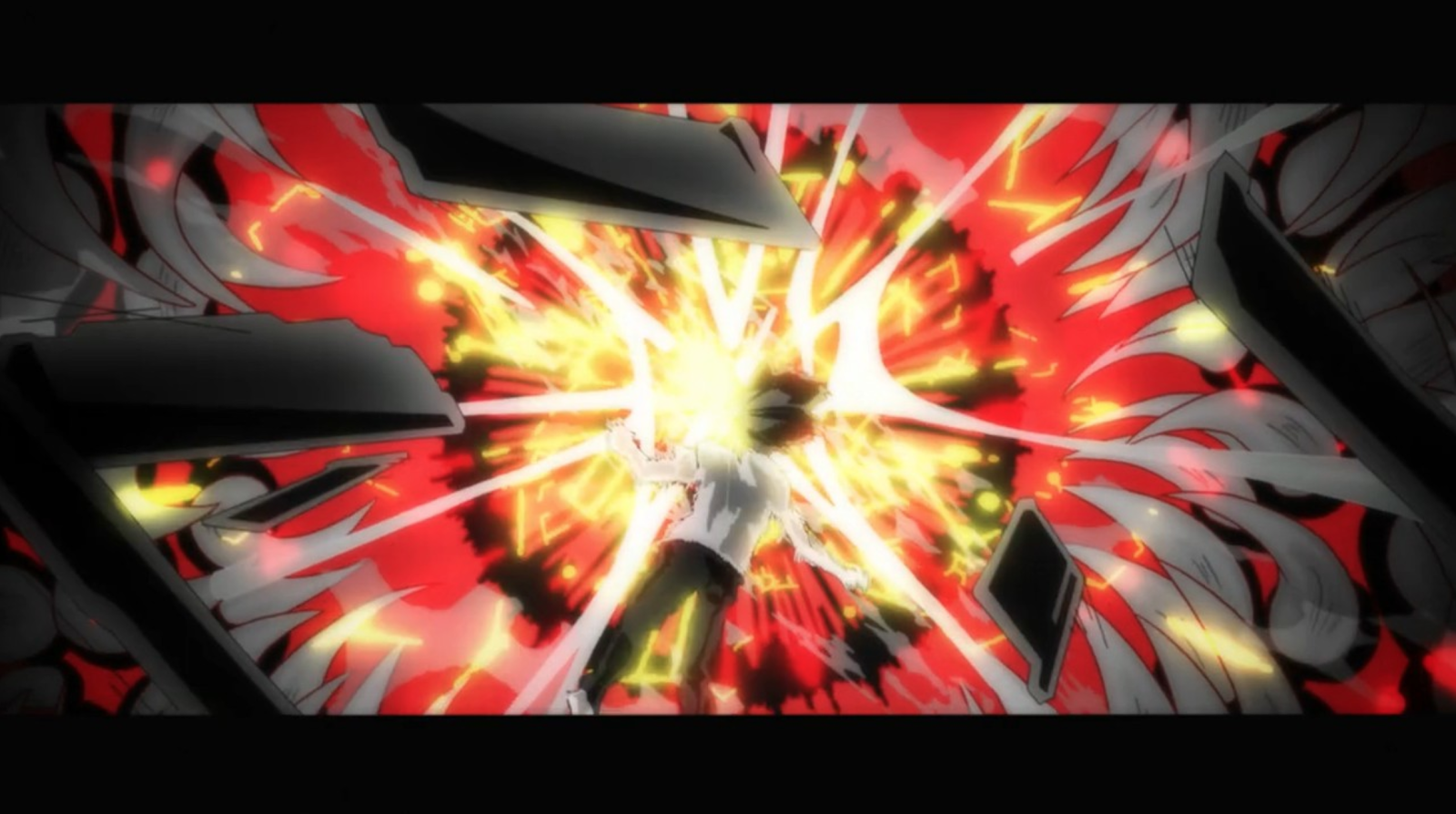 This all ends with one of the most emotionally affecting scenes in the arc, when the girl who bullied Mob in his mental hell apologizes for being such a mean person. Mob, being Mob, instantly forgives her, but there’s a certain momentum behind this action: people can change for the better. Our personalities, mindsets, and behaviors are always in a turmoil based on our circumstances, but we always have an active choice, or the inherent capacity, to progress.

The first step to moving forward is to be aware of your own faults and find the courage to overcome that. The person we are today doesn’t have to be the person we are tomorrow. Mogami and his arc are a haunting realization that if we let those battles become representative of the wars we lose, then we lose altogether. But with him, comes the potential of Mob, and the message that courage isn’t in the form of being physically strong or psychically powerful; it’s about battling your own fears and finding a way to a better tomorrow. Do you think the Mogami is the best arc of the second season so far? Do you have any other favorite moments from these two episodes?  Let us know what you think in the comments!
----
When not finding ways to doom all her ships, Natasha can often be found on her twitter as @illegenes, or writing more about anime on the blog Isn’t It Electrifying! Feel free to swing by and say hi.
Etiquetas
mob psycho 100
« Publicação anterior
A espera valeu a pena! Terceira temporada de PSYCHO-PASS é anunciada
Publicação seguinte »
Isekai Quartet, crossover chibi dos maiores sucessos do gênero, ganha novo vídeo promocional e data de estreia
Outras notícias principais
0 comentários
Sê a primeira pessoa a comentar!
Ordenar por: