What do Squid Game and isekai have in common? Let's find out! 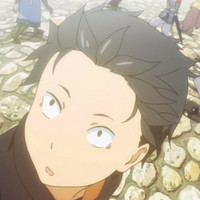 Hello everyone, and welcome to Why It Works. This past week, I joined much of the wider world in absorbing Squid Game as fast as humanly possible. The show is a thrilling combination of death game shenanigans and social critique, introducing us to a wide array of memorable characters and then killing them off with reckless abandon. Even though its author, Hwang Dong-hyuk, struggled for ten years to see it produced, it feels acutely appropriate for this moment in history, illustrating the yawning gap between the haves and have-nots with precision and fury. 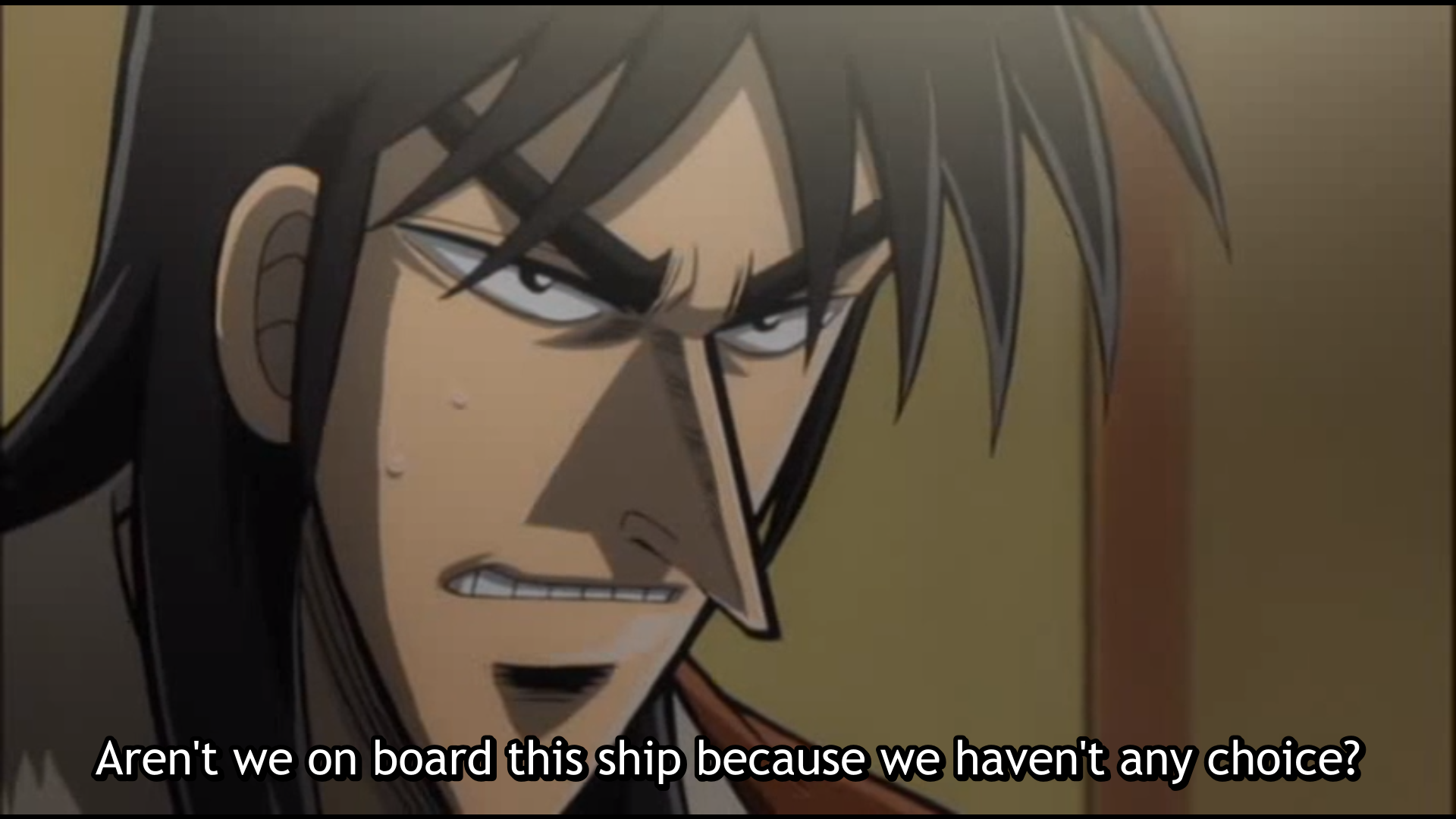 In fact, Squid Game feels so appropriate for this moment that, while watching it, I couldn’t help but feel struck by the parallels between it and much of modern anime. Dong-hyuk hasn’t been shy about sharing his influences — he’s explicitly stated that Squid Game was inspired by stories like Kaiji and Liar’s Game, as well as the original Battle Royale. But at this point, “capitalist death game” doesn’t have to be a series’ premise to be its ultimate takeaway; simply commenting on society will provoke such themes, and even trying to escape from society ends up illustrating the nature of modern injustice. As such, in the desperate struggles of Squid Game’s heroes, I couldn’t help but see echoes of modern isekai.

Squid Game’s characters are driven by the same base needs driving many isekai heroes. Having either failed to integrate into society or been outright rejected by it, their lives are defined by poverty and disappointment. Even those who’ve seemingly integrated into the system are broken or isolated in some way, with old promises of a reliable career and fulfilling family now shattered by an unstable economy and atomized private life. Just like isekai’s gallery of NEETs, loners, and exhausted office workers, Squid Game’s characters have failed to gain happiness in the mundane world and are sent off to a fantasy world instead. 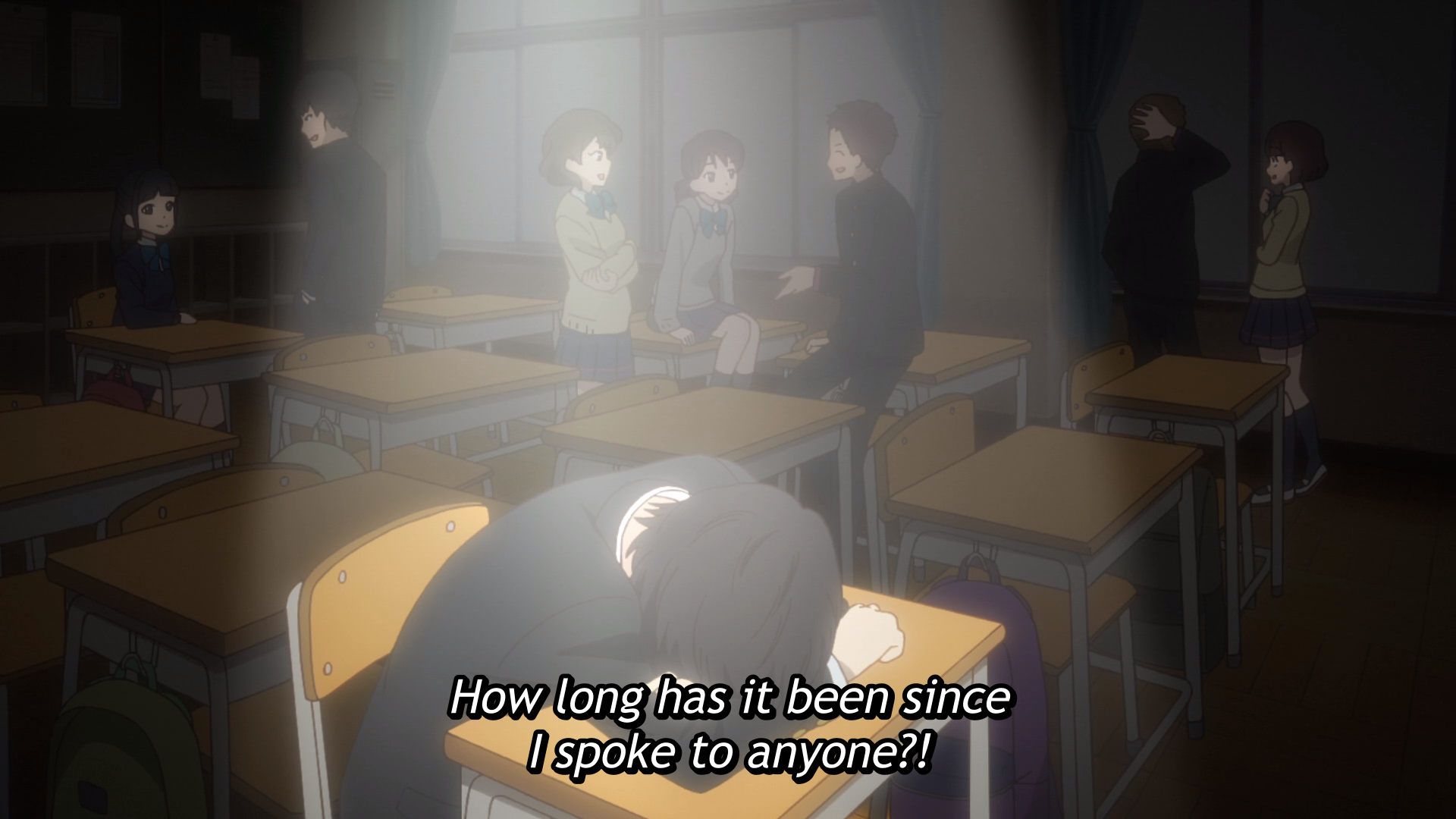 “But the Squid Game world is a slaughterhouse,” I can hear you say. “What does that have to do with the fantasy worlds of isekai?” Personally, I see a lot in common between the two. For both Squid Game and isekai, the chosen new world is a return to childhood, which may well be the last time the world made sense for their protagonists. In Squid Game, this new world is one of playground games remembered from the author’s youth; in isekai, it is a world informed by role-playing games and light novels, familiar and cozy venues for comforting adventures. These are worlds defined by challenges that their protagonists have an equal shot at, or even an advantage in, as compared to the nebulous skillsets demanded by modern capitalism. Though the consequences of failure may be dire, at least the aesthetics of these worlds promise comfort and familiarity, a place where you belong.

Along with the comforting aesthetics of childhood, these new worlds are governed by explicit and well-defined rules of advancement. In the world of an isekai, the systems that determine our worth are solid and transparent, clear numbers with clear consequences. If we wish to gain renown, the process is simple — we go on quests and level up, gaining treasure and experience that each possess a clear, unshifting value. When you compare it to the real world, the appeal of such a place is obvious. In reality, it is possible to struggle for years without any clear result, and many professional pathways simply aren’t available to us regardless of our personal effort. Given this, the clear rules and results of an isekai or Squid Game world can seem tempting — of course, as Squid Game indicates, sometimes the illusion of fairness can be used to perpetuate underlying systems of injustice, or even to pit potential opponents of those systems against each other. 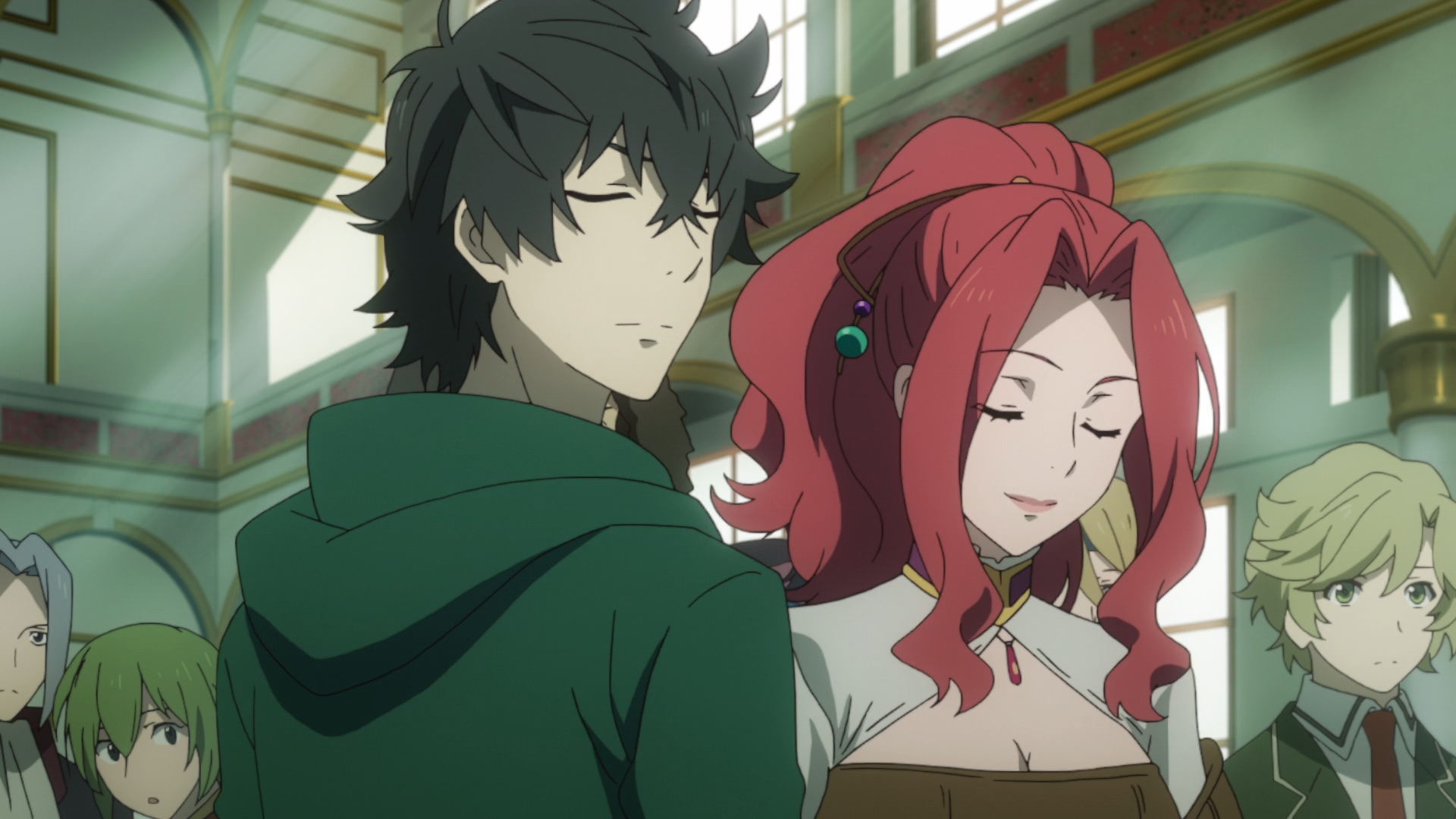 Isekai are far from immune to similar corruptions of their initial promise. Many such shows don’t necessarily promise an escape from the old world’s hierarchies, but rather an inversion of the old social order, with the prior losers now lording over their former superiors. Written as personal fantasies of escape and redress, it’s no wonder that these stories sometimes verge into callous revenge narratives. But is such a path really a just or sustainable solution? Just as reorienting society on the lines of who can run fastest or jump highest is ludicrous in Squid Game, so it seems to me that bending society toward the protagonist’s abilities is no solution to the real injustice informing isekai narratives.

So what is the solution then? Or at least what solution do these stories arrive at? In Squid Game, the trials of chance and skill are revealed to be a farce, and even if you win, you still have to return to the mundane and oppressive reality. Seemingly understanding this, most isekai protagonists tend to hang around in their new world, abandoning the dissatisfaction of our world for good. True victory over the old world’s systems is impossible — you either accept things will always be this way, or stage a perpetual retreat to fantasy.

Neither of these are particularly happy endings and neither of them challenge the status quo that drives their protagonists to retreat from the world. There’s a pretty simple reason for that: in truth, there is no clear answer to the emotional needs these stories are addressing, at least not on an overarching societal level. Popular fiction tends to reflect the conditions of its creation, and these are the prevailing issues of our time; if these stories seem hopeless, it is because we are still searching for reasons to hope. 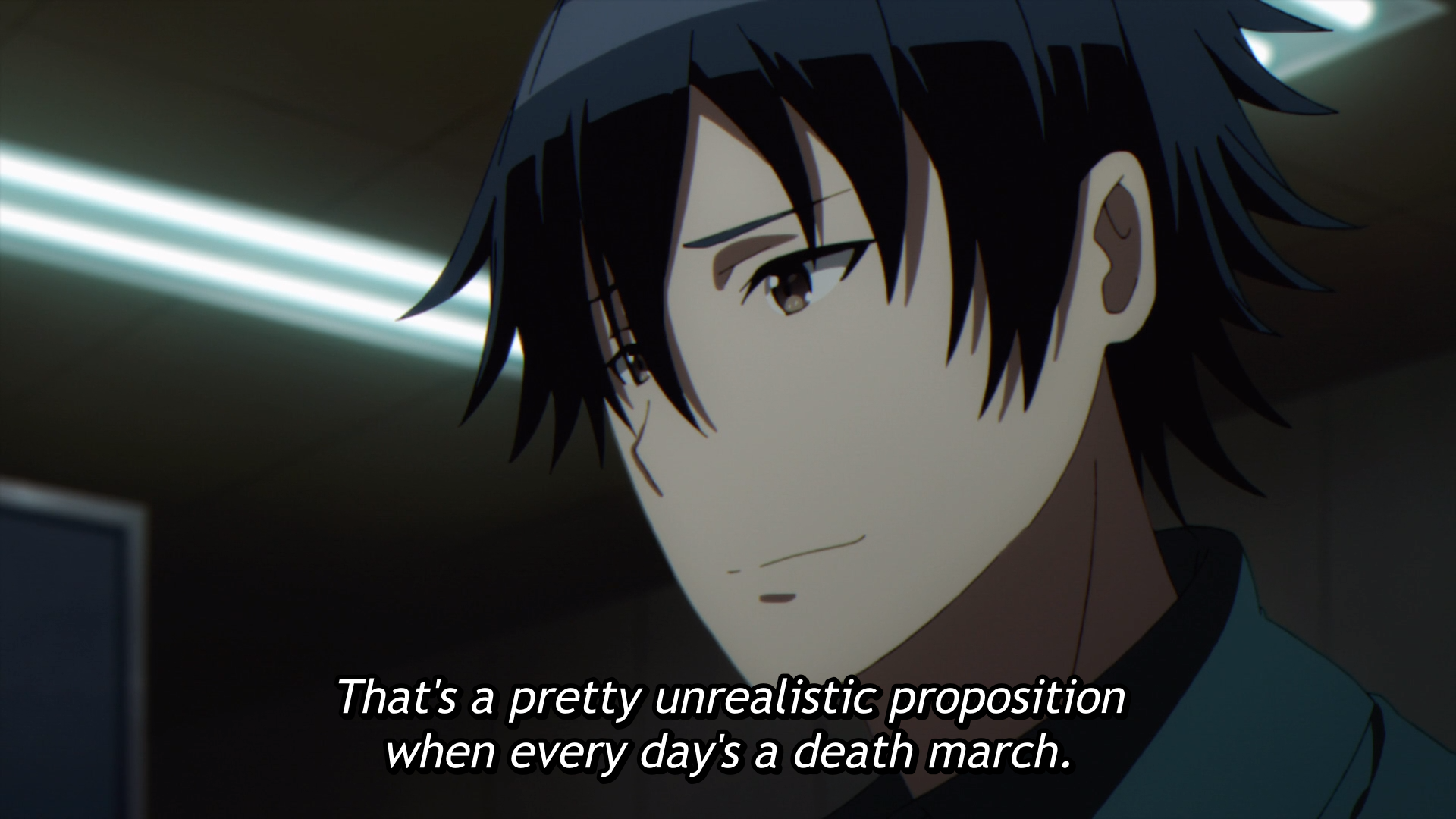 We are living through a difficult moment in human history and the stories that resonate with us will naturally reflect that. Personally, I would love to see more stories that move beyond the tragedy and offer some righteous retaliation for economic injustice. And in fact, many of the best isekai offer not revenge, but renewal and the chance to make a kinder world this time around. But even in our angrier stories, in these fantasies of escape and compartmentalized success, we can gain an understanding that we’re all fighting through the same struggles. Stories like these, that so deeply touch on the anxieties of modern living, offer a vital sense of solidarity regardless of their conclusions. And hopefully, if such stories can unite us, we will build a future with brighter stories to tell.