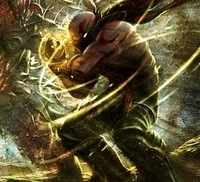 You'll have to sit (or skim) through a mystifying intro and some unsubtitled explanation, but there's some clear gameplay footage to be seen throughout the 15-minute video, especially near the end.

Prior to this we saw a grim debut trailer for Soul Sacrifice, which has players sacrificing parts of their body to perform magic. An example of the sacrificial magic is Excalibur: Shove your hand down your throat, pull out your spinal cord, and wield it as a sword. As a slave who serves a cruel sorcerer, torturing yourself to slay foes comes with the territory.