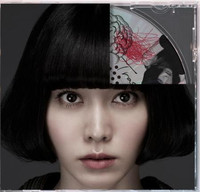 Japanese female singer Yasuha Kominami has posted a short version promotional video for her newest single "Kibou" (Hope) on YouTube. The song and the coupling track "Trash" are used as theme songs for the up-coming anime film "Asura" directed by Keiichi Sato (Tiger & Bunny). "Kibou" is originally sung by Yoko Kishi in 1970. The film is based on George Akiyama's manga of the same title in the early 1970s, so the choice of the 70's hit song may be intentional. The PV is directed by Sato himself and contains many footage from the film. The CD single "Trash/Kibou" will be released in Japan on September 26 and the film hits Japanese theaters three day after, on September 29.