Three New "Senran Kagura" Games Are in the Works 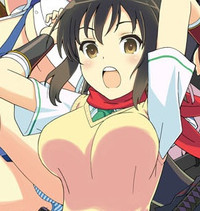 If you just can't get enough of Senran Kagura's particularly busty style of ninja action, Marvelous AQL has a few treats up its sleeve for you. Three new games are in the works, including Senran Kagura 2: Deep Crimson on 3DS, Dekamori Senran Kagura on PS Vita, and Senran Kagura: Eestival Versus for an as-yet-undetermined Sony platform.

The first to arrive will be Dekamori Senran Kagura, which is described as a "hyper big breasts cooking rhythm game." Losing means stripping in the Meteorise-developed game, which features 22 songs and hits Vita in Japan on March 20.

The first character set for the game will pack the Hanzo Academy and Homura Crimson Squad for ¥2,400, with the Death Cram School and Hebijo Clandestine Girls' Academy set arriving on April 24 for ¥2,500. A full set with both will be available for ¥4,083 ($39).

Senran Kagura 2: Deep Crimson—the Tamsoft-developed side-scrolling action game that has a playable male character (Ikaruga's older brother Murasame) and boss battles set in 3D fields—is due out on 3DS in Japan on August 7 for ¥6,998 ($67). It will also feature both co-op and tag-team multiplayer modes.

Less is known about Senran Kagura: Eestival Versus, but we should know more about the Sony-bound entry soon.