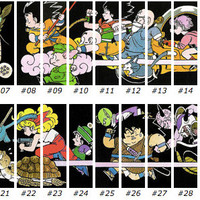 Incomplete series such as Nana or even Osamu Tezuka's Phoenix became a point of contention as to whether they fit the criteria of the poll. As sid collection in which volumes were lost or damaged. One fan shared a horror story about losing volumes to water damage in a typhoon.

The top 15 completed collections include