This will be celebrated with cover, color page, and favorite-character poll results. The series will have run 15 volumes 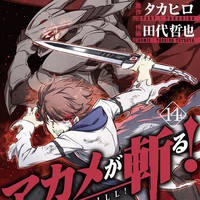 Will the evil empire be overthrown? Will someone die? Readers will find out in the final chapter of Takahiro and Tetsuya Tashiro's violent fantasy manga Akame ga Kill! This will be published in the January 2017 issue of Gangan Joker, out on December 22nd, as announced in today's December issue.

The conclusion will be celebrated with cover, color page, and favorite-character poll results. The series will have run 15 volumes.

2013 spin-off prequel Akame ga Kill! Zero, by Takahiro and Kei Toru, has also announced plans to move toward its conclusion. The manga, released in North America by Yen Press, was adapted into a 2014 TV anime.