The battle to retake Wall Maria is about to begin 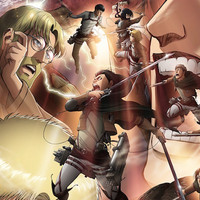 It's the announcement you've been waiting for! Crunchyroll revealed plans to simulcast Attack on Titan Season 3 Part 2 as part of the Spring 2019 anime lineup, so there's never been a better time to refresh yourself with a quick marathon of previous seasons, starting at the very beginning.

The battle to retake Wall Maria begins now! With Eren’s new hardening ability, the Scouts are confident they can seal the wall and take back Shiganshina District. If they succeed, Eren can finally unlock the secrets of the basement—and the world. But danger lies in wait as Reiner, Bertholdt, and the Beast Titan have plans of their own. Could this be humanity’s final battle for survival?

See what else is cooking for the Spring 2019 season!