In the last three decades, Pierrot has earned a reputation as one of the leading animation producers in Japan. Pierrot produces a wide variety of programming including science fiction, comedies, action-packed cartoons, and educational shows. These productions have attracted an audience ranging from toddlers to adults. With 30-years of experience, Pierrot has firmly established itself as one of Japan's most versatile, dependable, and creative production companies.

Many of Pierrot's most successful productions, including "Yu Yu Hakusho" (1992), "Tokyo Mew Mew" (2002), "NARUTO" (2003), and "BLEACH" (2004) have been broadcasted not only in the US but also in major cities around the world and have gained excellent reputation among viewers.

Our goal is to create animated works that reflect and are in step with the times, while expanding our business worldwide. We are always working to enhance our technical expertise, improve the quality of our animators and artists, and to produce imaginative animation that has vision and heart.

We hope you enjoy our works! 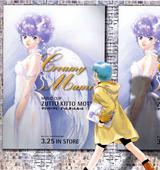 Yona of the Dawn