The saying goes "kill them with kindness," but perhaps it should just be "kindness." 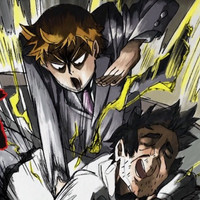 SPOILER WARNING for Mob Psycho 100 up to episode 11.

Thematically, Mob Psycho 100 has been all over the place for most of its run. As Brandon has been pointing out in his articles comparing the anime and the manga, the constraints of transforming a story in one form into an entirely different one often requires the adaptors to make tough choices about what's going to be included and what won't be. As far as I'm concerned, the creative staff for Mob Psycho 100's anime adaptation has done a great at nailing the core emotional beats of the story for its characters, succeeding at making watching it both an exciting and emotional experience. This is an important success, because doing so has grounded the narrative of the anime in the lives and personalities of its characters in a way that has made their struggles and triumphs meaningful and moving in the immediate act of watching the show.

At the same time Mob has been doing great work on the character level, it's also engaged a wide swathe of different thematic ideas—questions about identity, the nature of adulthood, issues of power and talent, and the emotional human reactions that come with such challenging concepts. This has made for a somewhat disjointed thematic base for the show, but the penultimate episode seems to be making a strong effort to bring all these disparate pieces together underneath one coherent umbrella of meaning—one that challenges many of our assumptions about the way a world like that of Mob Psycho 100 should work.

There's no greater force than kindness. 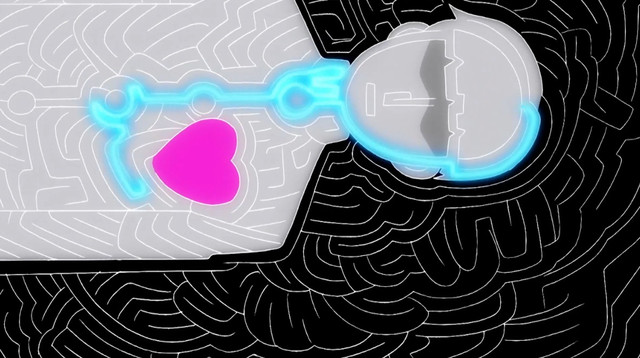 The crux of this idea appears at the end of episode 11, as Mob watches his friend Teru and his brother Ritsu fight for their lives against the leaders of Claw's 7th Division. Desperate in the middle of the battle, Teru implores Mob to use his powers to win the conflict and save their lives. At the same time, Mob hears Reigen giving him the same instruction he always has—don't use your psychic powers against other people. "I'm an adult, so I'll deal with them. There's no need to stoop to their level!" Reigen tells Mob—and, in doing so, gives us an entirely new way of understanding this situation.

The true battle here, and the one that has really been ongoing throughout the situations that have arisen over the last 11 episodes, is not between Mob and other espers—it's between two worldviews. One, the one advanced by Teru before he's defeated by Mob, Ritsu during his arc, and embodied by Claw, believes that power in all its forms (talent, popularity, etc.) is the most important thing. It is the key to happiness, the way to success. However, on the opposite side stands a philosophy advanced by the most powerless character in the entire show: that it is instead kindness that's the most precious thing we can strive to attain.

I suppose it would be easy to dismiss Reigen's platform of preaching kindness as the refuge of a man who lacks power. If you don't have power, why not invent a way of seeing the world where power is valued less and kindness valued more? But, as Reigen shows time and time again throughout Mob Psycho 100, his lack of conventional power has not destroyed his ability to control his own destiny. A clear example of this is the explanation of his "special talents," which are no more than normal actions (punching, massaging, throwing salt) but are still treated as significant and dramatic and important actions. To carry this idea one step further, these very mundane skills become special not because of any inherent quality they have, but because of the way Reigen uses them to positively impact the lives of those he comes into contact with. He may be a conman, but there's no denying that he's doing good out there in the world. This is key. Reigen doesn't just preach kindness—he lives it. 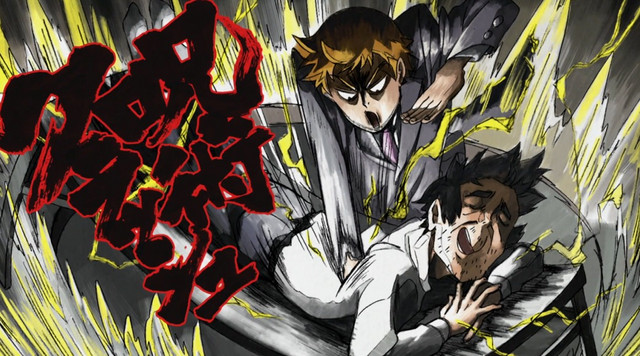 And there's no person on whom Reigen has had a bigger effect than Mob himself. Unlike his master, Mob is inherently powerful. And yet... that power doesn't mean anything to Mob because it's not the kind of power he wants. The power of the talents Ritsu has, for example, is the sort of thing Mob wants—but, because of who he is, he can't have. And this dissatisfaction with the self and the self's limited power to change has hampered Mob's vision of the sort of person he can be (and is). Because Mob seeks to grasp the sorts of powers he does not and perhaps cannot ever have, he's blinded to the fact that he is, truly, a wonderful person. He is kind, caring, and sensitive, protective of his younger brother and principled enough to not use his powers for evil.

The path Reigen is trying to show Mob, then, is one where he can understand an important truth: It doesn't matter what talents you have (or don't have). What matters is the type of person you become using the qualities you've been given.

This is the essence of kindness. Anyone, whether they're the most powerful esper in the world or a conman with no psychic power to speak of, can be kind. Mob can use his powers to help people or to harm people. It's a decision, and the decision to be kind grants one the sort of intangible power we see at work in the otherwise powerless Reigen. And as Reigen ponders the confrontation with the Claw leaders, who he describes as children who haven't grown up, we also understand that at the core of Mob Psycho 100's conception of adulthood lies kindness as well. "Become a good person..." Grow up to be a good person... A real adult is one who can make the decision to be kind, and it seems it is to this conclusion that Mob Psycho 100 is nearing as its finale approaches.

And so it seems the question that will be answered in the final episode is this: What kind of person will you become, Mob? 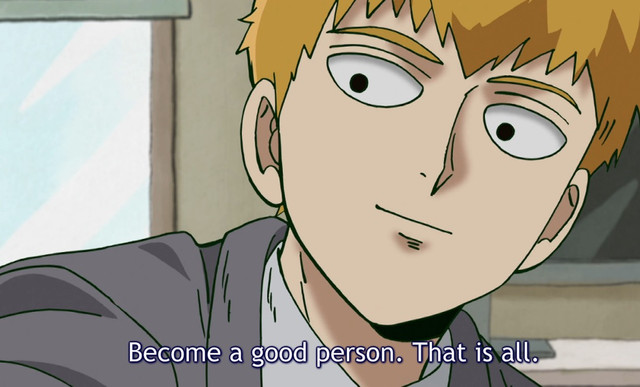