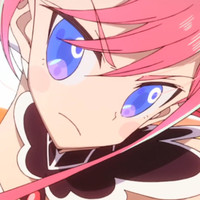 A tranquil, snow-covered forest where shadowy beasts lurk. A bizarre and perverse land of protruding structures and nightmarish machinery. Kiyotaka Oshiyama’s Flip Flappers is an anime with no shortage of artistic ingenuity – each passing episode its heroines, Papika and Cocona, descend down a rabbit hole deeper than the last.

However, few could have predicted the girls’ third expedition. If you thought Flip Flappers’ second episode was uncanny, then Oshiyama certainly raised the bar again. While Flip Flappers’ third episode shared little tonal cohesion with the previous two, it was a fantastic pace changer in line with Oshiyama’s approach to directing. Taking a page from Alice in Wonderland’s ethos, Oshiyama voices a desire for adventure and absurdity. 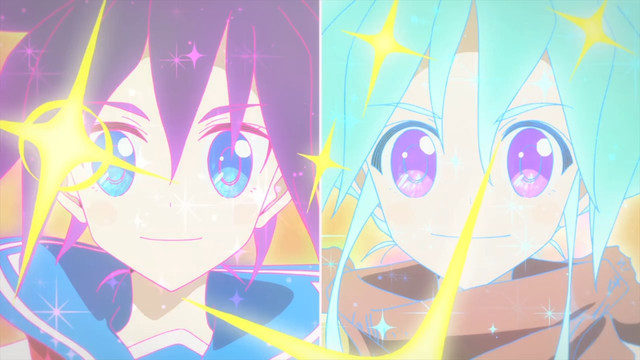 What begins as yet another homage to Mad Max: Fury Road evolves into a hot-blooded magical girl fistfight rivaling the action from the best Precure episodes. Stylish henshins, biker gangs and bondage queens all come together in one place as two of the most unlikely genre fusions occur onscreen.

Since the early 90’s, battles have been a cornerstone of magical girl anime. Franchises such as Sailor Moon popularized the trend of a sentai team structure – where a group of heroines would use their physical and magical abilities to combat monsters each episode. Although sentai-influenced magical girl anime are a rarity in the current anime market – with Toei’s Precure franchise being one of the last standing vestiges of this bygone era – you still find plenty of homages in modern anime.

Flip Flappers’ third episode is a love letter to the energy and fiery passion exuded by good magical girl anime. Unhindered by expository banter and other narrative obligations, Oshiyama cooks up a spectacle that any longtime fan would fall in love with. 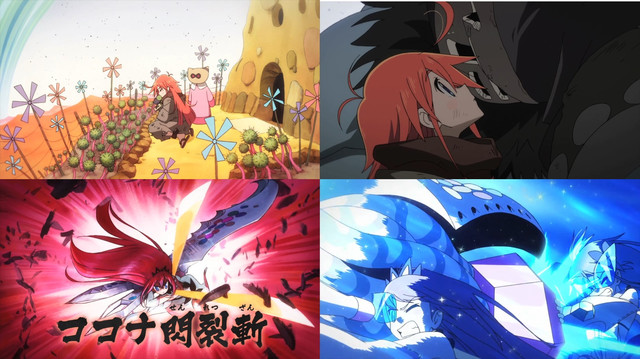 There’s a couple shout-outs to magical girl anime sprinkled throughout the episode. For starters, the fight between Papika and a mind-controlled Cocona at the start of the episode is reminiscent of the second Futari wa Precure: Max Heart movie. In this movie, the two heroines, Cure Black and Cure White, were controlled by their enemies because of their insecurities and ended up fighting each other. Likewise, in Flip Flappers, Cocona falls victim to the mind control because of her anxieties surrounding her lack of control over her life.

But what’s a good magical girl anime without henshins? The choreography during Papika and Cocona’s full henshin sequences are stylistically evocative of more modern magical girl anime. Featuring dynamic camera movement, artistic nudity, and even a couple poses that reference Usagi’s henshin from Sailor Moon S, Flip Flappers’ understands where its roots are. And if getting the henshin fundamentals down wasn’t enough, Papika and Cocona know that you can’t be a magical girl without a proper introduction speech. The two girls think up superhero names for their duo on the spot, reprimand the villain for her heinous actions and then immediately pose in sync. It’s perfect.

The real world that Cocona lives in is drab and almost sedate. Few people in her life truly understand her and she’s unsure whether she’ll ever stand out or make something of her life. It’s only when Papika takes her by the hand and whisks her away to these strange but lively universes that her true colours show. In Pure Illusion, Cocona can be her own superhero and herself. 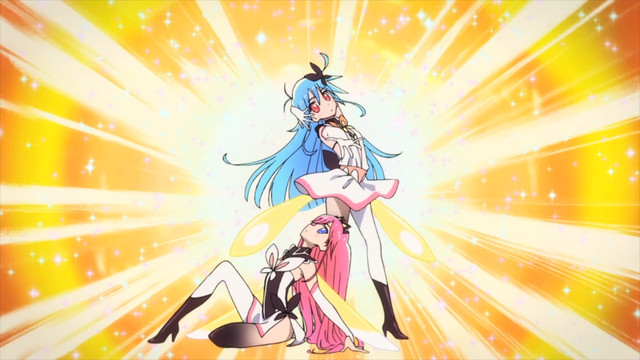 "Evil flower of Pure Illusion...we're going to pluck you out!"

Did the third episode of Flip Flappers get your blood pumping? Let us know in the comments below!