FLIP FLAPPERS comes to a close with a spectacular conclusion! 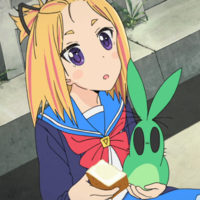 Of the many conclusions of 2016, it’s difficult to think of one that wrapped up its story as neatly and satisfyingly as FLIP FLAPPERS. The final two episodes impressively balanced storytelling provided some much-needed exposition, gave even the most minor characters moments to shine, and concluding Cocona’s two-part journey to discover herself and find love. This primary narrative was expressed in a particularly fascinating way, Cocona’s interactions with Papika revealing just how closely her two quests were intertwined, with each being integral to the success of the other. Papika’s persistence drew Cocona out of her shell and to the climactic moment where she was forced to regress or move forward just as much as that agency was necessary for Cocona to participate in their relationship. Role-reversal and mirroring, both visually and in the traditional social sense, were used to elegantly portray the mutual love between its leads that visual storytelling had spent the season building toward. 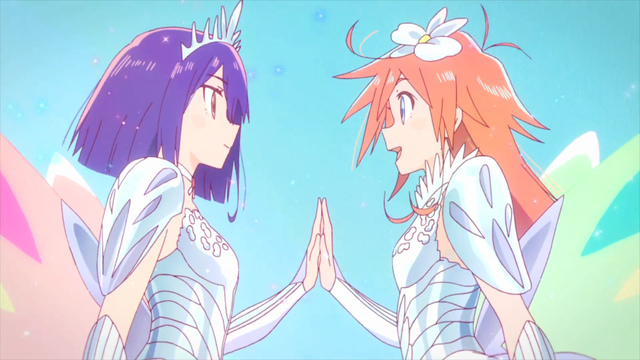 Papika has ever been the active agent in their relationship. Papika was the romantic pursuer, always the one to reach out first, to touch Cocona and fearlessly express herself, embracing Cocona in Pure Input and declaring her feelings “I love love love you” in Pure XLR. Just as Mimi introduced Papikana to the world of Pure Illusion as a gesture of friendship, Papika shows Cocona the same world as a gesture of love. Papika’s greatest passion is to go on adventures in Pure Illusion, so it's only natural that she would share her treasure with the person she cares for most.

The fear for Papika’s safety is what first awakens the power of Cocona’s Amorphous in Pure Input and Papika’s relentless advances that allow Cocona to build confidence and begin to reciprocate her feelings, but Cocona has always been the receptive agent. Her initial resistance becomes acquiescence and eventually willing participation, but it is always Papika that initiates and Cocona that holds on for the ride. This dynamic of pursuit and response recurs visually and verbally over the course of FLIP FLAPPERS, whether in the literal sense of Cocona clutching Papika for dear life as they ride her hoverboard or resolving to never let go when Papika reaches out to her.

Pure Howling sets up Cocona’s final step into her personal agency by making a choice that can't be reduced to fight or flight. Cocona must choose between Papika’s romantic love over Mimi’s (twisted) maternal love and, in so doing, step away from the security of allowing herself to be lead by another. Just as Cocona has taken all of her cues from Papika up until that point, she mirrors Papika’s earlier declaration by saying “I love love love you”, expressing the mutuality of their feelings in a shared language. Given Papika’s unmistakeable feelings for Cocona, it becomes clear in a simple sentence almost approaching nonsense language that Cocona loves Papika as well.

Where Pure Howling uses Cocona’s agency to establish her love, Pure Audio uses her love to establish her agency. Even in Pure Howling, Cocona’s reaching outward was mirroring Papika’s own gesture as she was desperately attempting to free her and mimicking her own language. The finale of FLIP FLAPPERS features Cocona for the first time taking initiative in their relationship. Leading into their climactic battle with Mimi, Cocona reverses their roles by pulling Papika aside and asking if Papika loves her for who she is or what she can do. Cocona reaffirms their feelings, again mimicking Papika even as she says “I love love love you”, but then Cocona verbalizes her own intent, declaring “It absolutely has to be you. I want to see many more worlds with you.” In effect becoming an active participant their relationship, no longer following along but participating because it’s what she desires. Cocona wants to go on adventures and, most of all, wants Papika to be with her.

In addition to the powerful simplicity of the characterization in the culmination of Cocona’s personal journey, FLIP FLAPPERS finished strong with its trademark visual storytelling, collapsing the entire story back upon itself through its climax and denouement. In order to save Cocona, Yayaka and Papika were forced travel in reverse through the worlds of Pure Illusion Papika had explored with Cocona before reaching the first Pure Illusion we had witness in Cocona’s dream with her mother. In another bit of role reversal, Papika freed Cocona from the same cage Cocona had found her within after Mimi had broken into the Amorphous. When Mimi is defeated, she finds herself in a pond within a darkened forest, the same image that appeared in the school hallway. 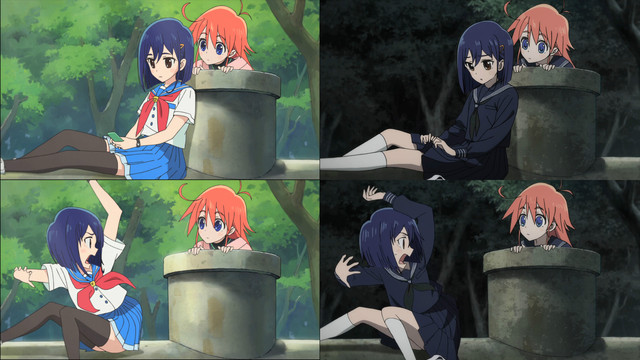 In the concluding moments of Pure Audio, Cocona searches for Papika just as Papika had onces searched for her, eventually discovering her in a perfect recreation of their original meeting by the rabbit hole, the liminal location where they went on their first adventure together, where Cocona's role in the story began. Together they depart Pure Illusion, accompanied by a flock of giant butterflies, symbolic of Cocona emerging from her cocoon. The thread of fairy tale unwinds itself completely as the girls emerge into the endless sky where Mimi and Papikana once embraced, the beginning of Papikana's own journey, to start the story anew as partners. 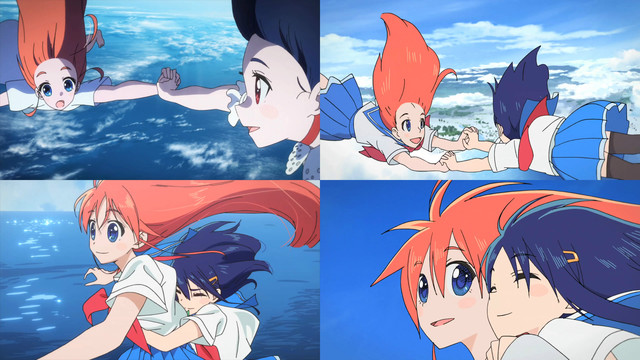