A Princess and a Wedding: What's Next for DARLING in the FRANXX?

Will a ruined wedding fan the flames of rebellion? 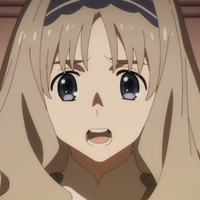 Last weekend, when an estimated one billion people tuned in to watch the Royal Wedding, we of the anime world instead turned our attentions to the union of another couple: DARLING in the FRANXX’s Mitsuru and Kokoro. Unlike Prince Harry and Meghan Markle, however, what awaited them was far from a happily ever after. Their ceremony raided under Papa’s orders and the star-crossed couple’s memories erased, the latest and most invasive denial of happiness could be the turning point for the futures of both Squad 13 and DARLING in the FRANXX.

Their days of paradise in the derelict Mistilteinn brought to a sudden close, Hiro and the others now find themselves in a different place both physically and emotionally. When we rejoin Squad 13 later this week, we’ll find them not in the dorms they called home for the series thus far, but in the eerily clinical cells of the “Bird Nest” parasite camp as they await orders in frustrating stagnation.

The real driving force of the next episode, though, will be where we find them emotionally. Squad 13’s reunion with Mitsuru and Kokoro was a painful one. While they still live, the memories of them growing closer, and of the love they shared, are gone. 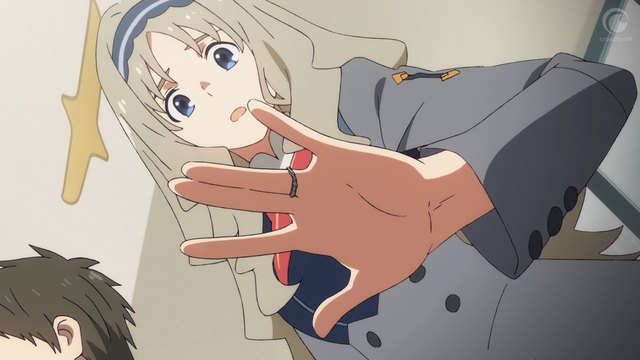 The extent of their altered memories and what they recall of Squad 13 remains unclear, but the Mitsuru and Kokoro we knew are gone, with the differences in memory likely to hang over Squad 13 like a dark cloud. Denied even the freedom to be happy, Hiro’s words in last week’s episode say it all: “We’re at the end of our rope.”

What do teenagers do when disillusioned with authority? They rebel. For most of Squad 13, Mitsuru and Kokoro’s indoctrination may be a wake-up call to the cruelty of a figure they once revered as a God – but Hiro and Zero Two have been subject to this pain before. Trying to help Zero Two find freedom as a child cost Hiro not just his memories, but his friendship with Mitsuru, which has been cruelly denied yet again.

As a child in The Garden, Hiro became the glue that held the group together, giving them names they use to this day. As the others pick up the pieces of their new situation, we may see Hiro take the first step toward assuming that role once more. While the next episode likely won't be one of immediate action, it may sew the seeds of doubt that will sprout into DARLING in the FRANXX’s end game: children versus adults.

Could they go it alone though? Even with the power of their mechs, Squad 13 will certainly need influential allies in their battle for self-determination. One possible ally may have been hinted at in a particularly intriguing exchange.

Papa’s will is one of emotional subjugation, a humanity stripped of its feelings and urges, so why was Squad 13 the only one not subjected to indoctrination? Well, there's one man behind that. Dr. Franxx, who in a conversation with Hachi, noted surprise at the rapid development of Squad 13’s reproductive instinct, mere moments after 9'α advised Nana to “stop getting into mischief” with the researcher.

With Dr. Franxx possibly working against Papa’s wishes, could his desires find a middle-ground with Squad 13’s in the coming weeks?

While I previously speculated that cryptic teases about adulthood could be tied to youth mortality, could the dream of growing up simply be unattainable because Papa won’t allow it? With jealousy in bloom triggering a “relapse in puberty,” Nana being discarded as defective shows how the powers that be view the key developmental stage, so perhaps Papa’s indoctrination is a way of limiting growth? We already know it isn’t foolproof, though, because Hiro recovered his memories. And, as evidenced by Kokoro’s lingering interest in the falling sakura, some small petals may still remain. 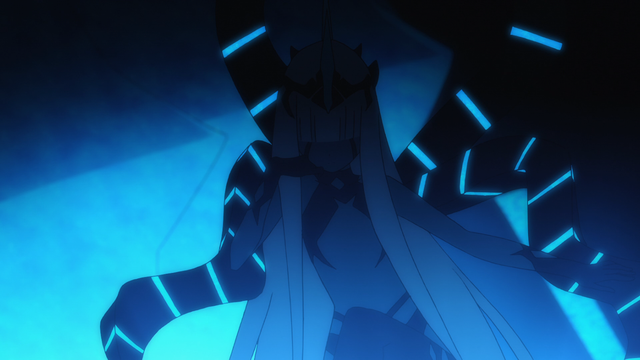 The fallout of Squad 13’s relocation and re-indoctrination may take the center stage this week, but the mysteries of the klaxosaur continue to be weaved in the background. Hiro growing horns has led to some using children’s tale The Red Ogre Who Cried as a blueprint of what may come from his relationship with the red-garbed Zero Two, which certainly sounds convincing if you’re familiar with the tale.

But what if the role of the Blue Ogre actually isn’t Hiro’s to play? Her appearances may have been brief so far, and her role still shrouded in mystery, but perhaps the key to unravelling the series’ secrets lie with the seemingly sinister, blue-skinned Klaxosaur Princess!

The week’s now reached its halfway point and we’re only days away! Will Squad 13 fight back against Papa? What is the relationship between Papa and the Klaxosaur Princess? What do you think will happen in the next episode of DARLING in the FRANXX?