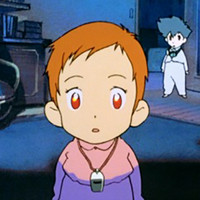 Mamoru Hosoda has what can best be described as an “enviable” filmography. Whether it’s his work in established franchises like Digimon Adventure: Our War Game! or One Piece: Baron Omatsuri and the Secret Island, or original films like Summer Wars, Wolf Children, and Mirai, Hosoda consistently astounds due to his mastery of grounding the fantastical with deep emotional relatability. It’s turned him into one of the most interesting directors working currently, and you can find the roots of what has made him so consistently successful in his first short film: the 20-minute Digimon Adventure.

Debuting the day before the TV anime of the same name was released in March 1999, Digimon Adventure is more than just a prequel to the popular series. It bursts with a kinetic life of its own, bouncing along with a visual dynamism that imbues every sequence with energy. The film is constantly moving, whether it’s Koromon being chased by Taichi’s family cat, the numbers on the clock cycling rapidly, or the father returning home in a state of shifty inebriation. 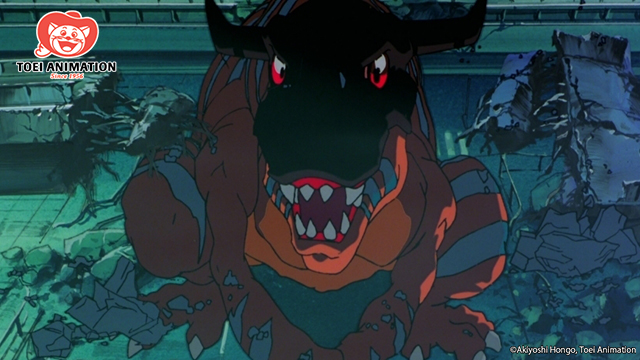 It being centered around monsters, a few of which like Greymon and Parrotmon are sizable enough to level whole city blocks, means that it often harkens back to the Tokusatsu ardor of classic Kaiju films. Mothra’s twitching limbs, King Ghidorah’s flailing necks, or Godzilla’s agitated swipes gave the artificiality of a man in a suit or a giant puppet a kind of animated existence. It’s similar here — the Digimon are breathing, moving, and even pooping, an example of Hosoda’s aforementioned mastery of rendering genre concepts as personable and tangible. 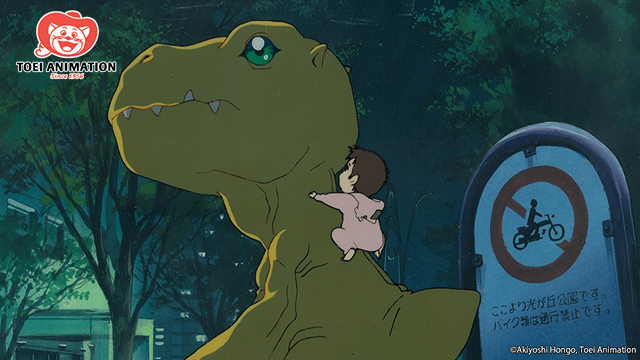 This all subtly builds so that when it appears that Greymon has been slain by his opponent, the stillness of his body and of the streets around him that, just moments ago, were the scene of a violent battle, are a gut punch. It makes it easy to forget that this tale will probably conclude with the triumph of the “good” Digimon, such is the unnerving nature of a world suddenly gone quiet.

The main characters here are Taichi and his little sister Hikari, meaning that all of the Digimon are framed through the perception of young children. However, Hosoda does allow this to make the film into a juvenile one. Rather, the use of this kind of “low angle” approach only increases the mystery behind them. There is no intricate Digimon backstory, nor is there anything that might confuse the young siblings. Instead, there is the mirth, awe, and fear that go along with youthful discovery. Their attachment to the Digimon is not one of the realization of being a “Chosen One” yet. It is simply innocence in the face of wonder, children latching onto a monster partnership that they do not yet understand, but are able to feel the importance of. 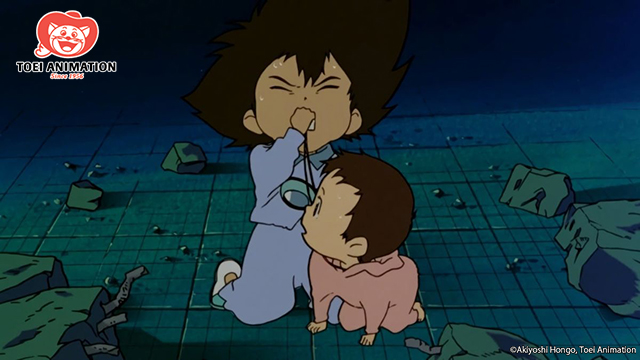 The script by Reiko Yoshida has relatively little dialogue. In fact, the most prominent sound is Hikari’s shrill whistle, a kind of rallying cry to the embrace of fantasy. This works for something as focused on a “Digimon out of water” scenario as Adventure, with the juxtaposition of Digimon and a standard Tokyo apartment and the constant flow of movement bringing almost a silent film quality. Late composer Takanori Arisawa adds the same kind of journeying rhythm and bombastic action music here that he’d take to the first four seasons of Digimon.

In the end, the film teases the upcoming Adventure, showing Taichi approaching the Tyrannosaurus-esque Greymon and comforting him with familiar confidence, but this 20-minute short works just as well on its own. Prior to this, the main home of the Digimon was in the virtual pets, items that existed mainly to give users an outlet to train and battle with them. And while the Digimon in the Adventure short, especially as they evolve, are definitely combat-friendly, the film also serves as the flipside to this ethos. There is something inherently alluring about them and their ability to transcend our reality. Thus partnerships are formed not just because they make great, strong companions, but because a closeness to them represents the ability to understand our own world better. Or at least the “real” one of the Digimon universe.

Digimon Adventure was not Hosoda’s first-ever work. Inspired by Hayao Miyazaki, he’d been an experienced member of Toei Animation studios, contributing key animation to various Dragon Ball features, Slam Dunk, and Sailor Moon. But it’s here that the artistic affinities that would make Hosoda one of the top names in anime film direction come to the forefront. By diving so effectively into the kaiju and coming-of-age genres, Hosoda not only assured that the Digimon anime would have a bright future but that he would, as well.