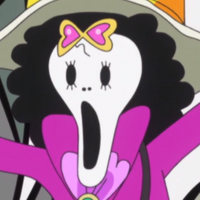 Hello everyone, and welcome back to Why It Works. As you may know, I just recently completed a journey all the way through the One Piece anime, barreling from the humble beginnings of East Blue all the way through the cataclysmic theatrics of Wano. It’s been a thrilling journey, and I probably don’t need to convince you all of One Piece’s expansive narrative strengths — though I have tried, repeatedly, in spite of myself. No, today I’m here to talk about a different aspect of One Piece’s evolution: its remarkable shifts in art style, built off a fundamentally flexible aesthetic that has evolved in all sorts of fascinating directions. 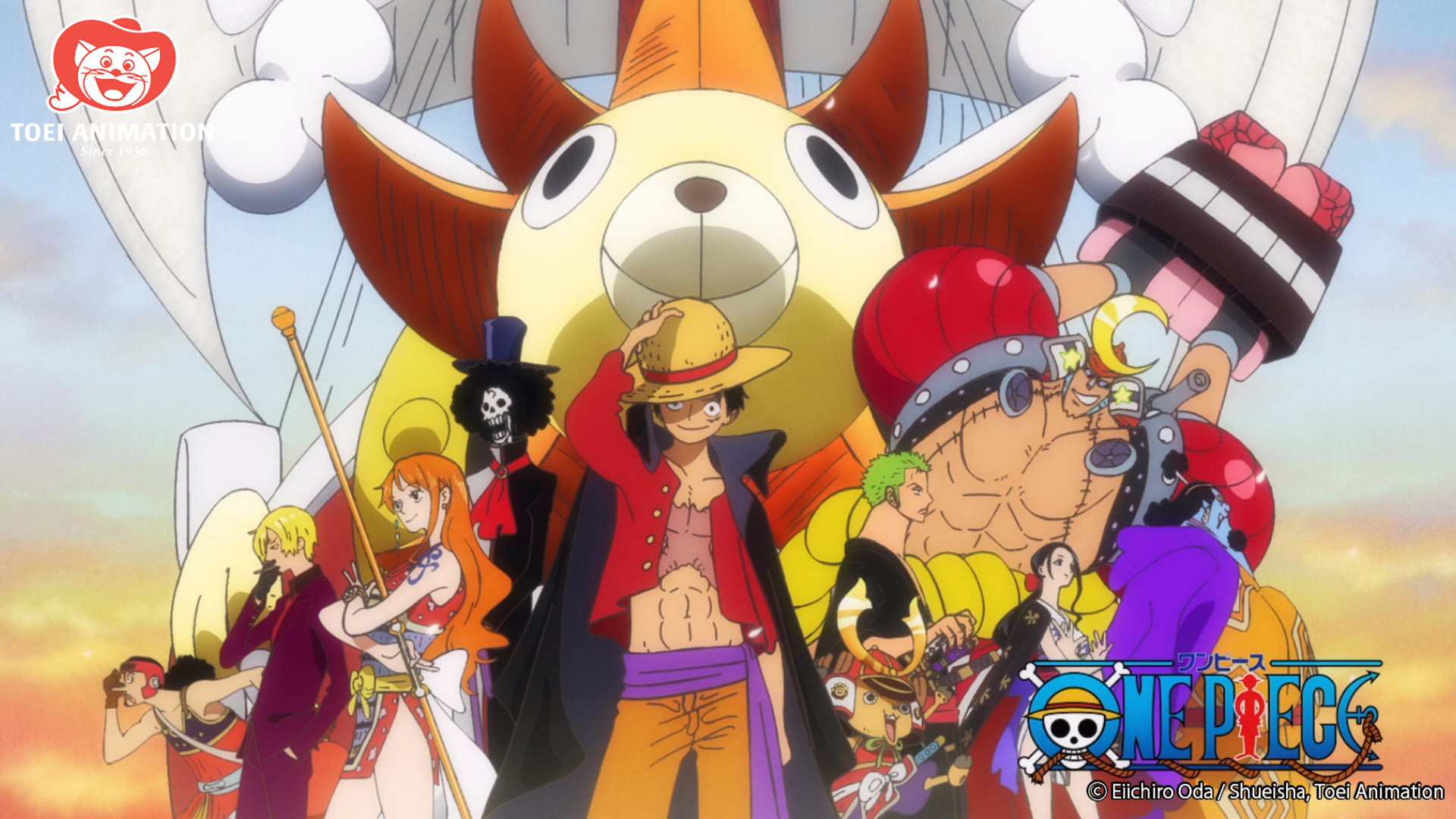 I’ve been intrigued by One Piece’s aesthetic shifts for quite some time, but the most recent reminder of the show’s flexible style came with the jump out of Oden’s flashback into the modern drama. That change was accompanied by a new set of eyecatches (the ad break animations at the center of each episode), animated by Takashi Kojima (the character designer of Flip Flappers and Ride Your Wave). Those eyecatches dazzled me from the start, especially because they’re so distant from One Piece’s standard aesthetic and are designed for an entirely different style of animation.

Kojima’s absurd talent is clear in the fluidity of the characters’ movements, but it’s a distinct kind of fluidity from One Piece proper. Kojima embraces physical distortion in order to convey personality and energy at once — a priority that’s clear in the blurred smears of the first eyecatch, but even more obvious in Sanji’s wildly stretched body in the second. Such stylistic choices embrace farcical, “cartoonish” visual design in a manner that’s different from Oda’s own preferences because it’s based on the principles of animation rather than still comic art. Through separating from the letter of Oda’s technique, Kojima is able to embrace One Piece’s spirit in a different way. 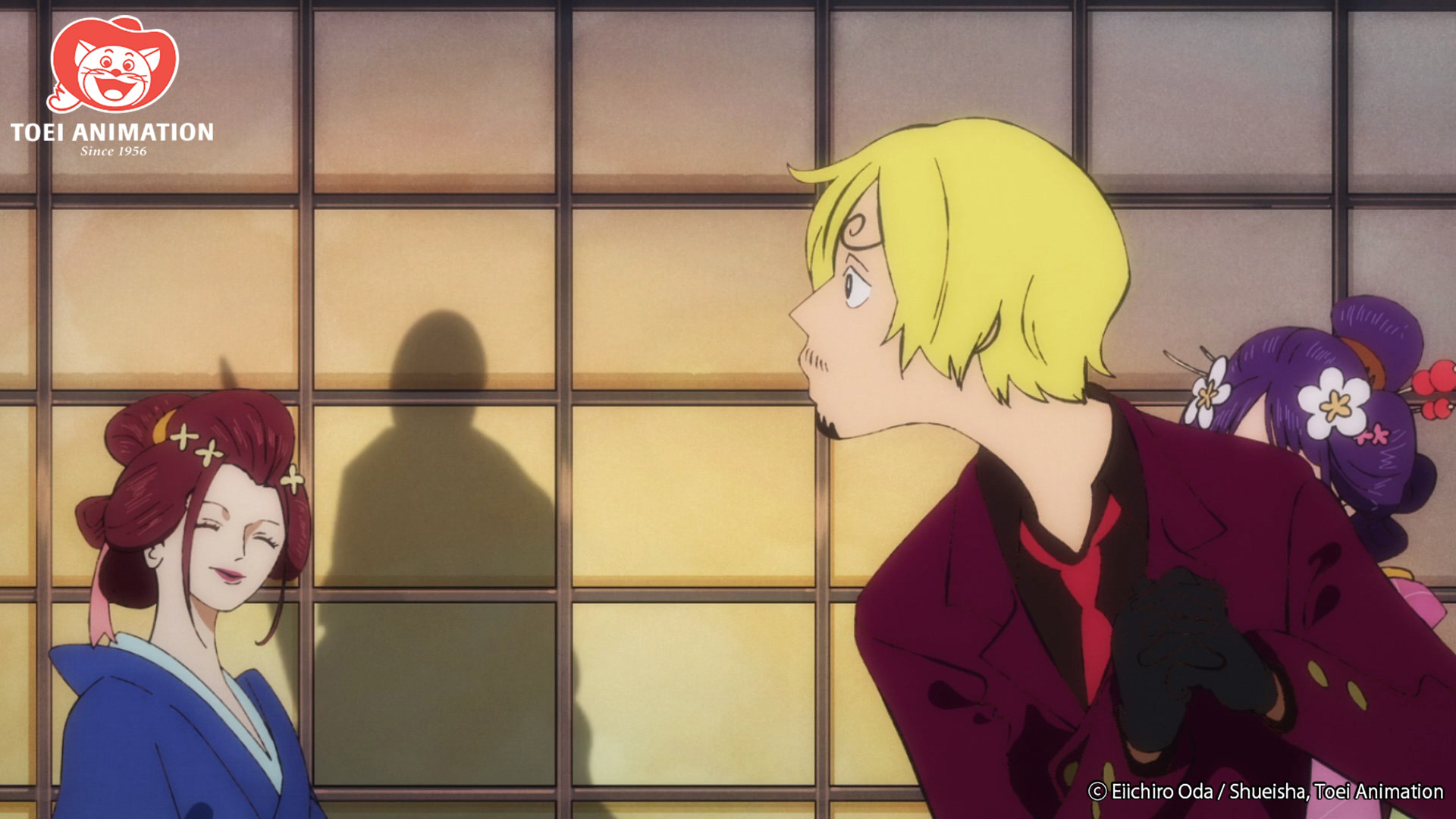 Even setting aside the style of movement, the base designs of these eyecatches are quite distinct from One Piece’s usual character models. Look at the fluid curves of a design like Nami’s, where the outline seems to obey the playful twist of a pen rather than the harsh bones of a skeleton. Look at Usopp’s impactful alignment of face and forward arm, or how Robin’s eyes and mouth express a warm playfulness that she generally only hints at. Sanji’s face in the first eyecatch is almost unrecognizable, yet the second articulates a fundamental Sanji-ness that the show can rarely top. Regardless of your feelings on the individual executions, these eyecatches demonstrate a cohesive vision of One Piece constructed with love for the source material, and a willingness to expand beyond it.

Of course, this is far from the only visual reinterpretation of One Piece’s style. Wano itself stands as perhaps the most significant deviation in style, with the arrival at Oden’s home coinciding with a dramatic shift in both character design and animation style. Gone was One Piece’s thin, spidery linework, replaced by a fullness of line art that seemed designed to echo traditional ink paintings. Gone too was the show’s relatively flat shading and limited effects animation, replaced by lush shadows and plentiful digital effects. Where prior One Piece arcs might have culminated in one staggering cut by Naotoshi Shida, the show is now brimming with gorgeous action cuts from a wide array of animators — and at the same time, new directors are bringing their own vision to One Piece, expanding on the source material in ways that elevate Oda’s core ideas. 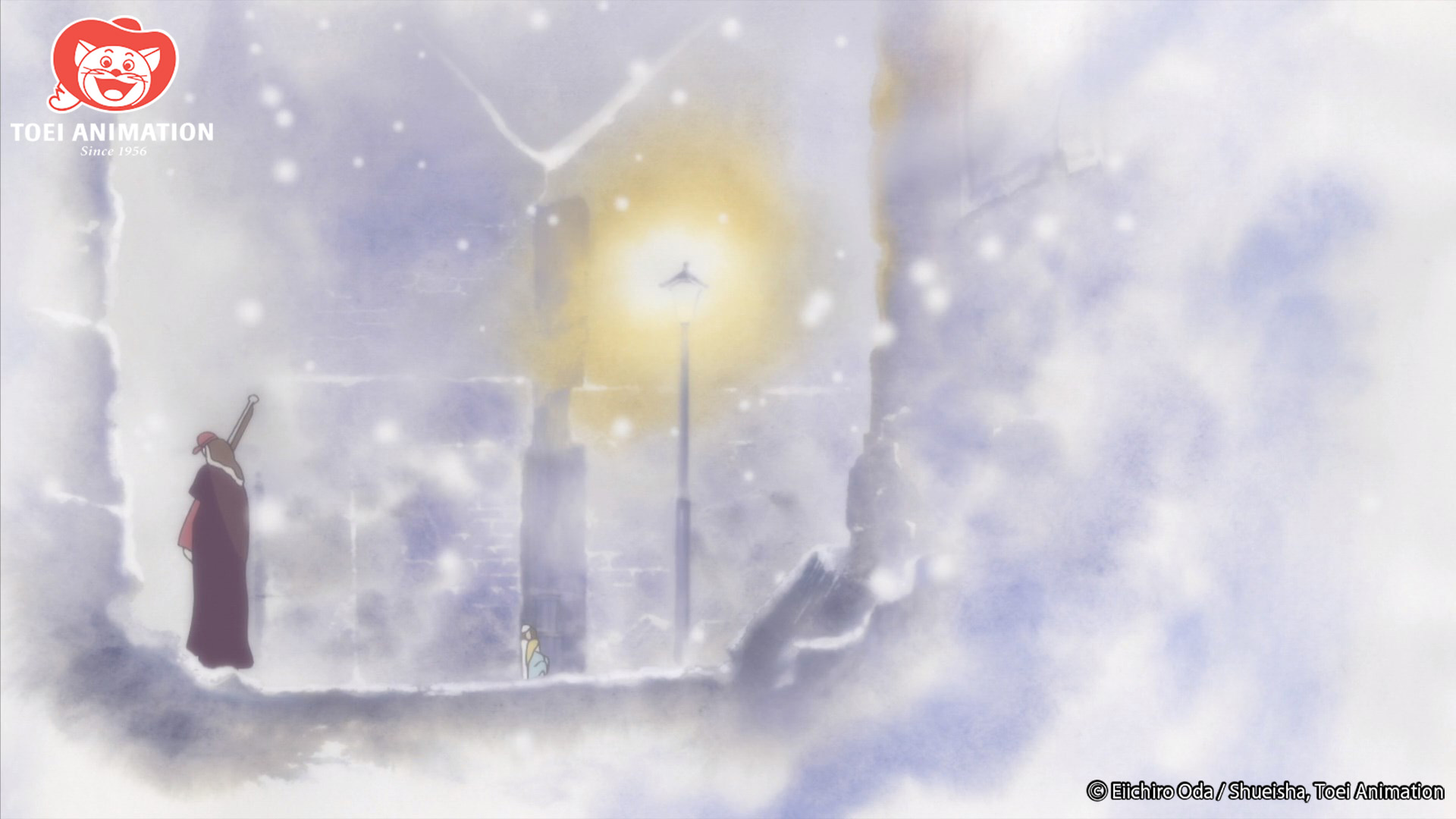 Historically, One Piece has always been a work that is ripe for visual reinterpretation. Its flexible, cartoonish designs offer significant freedom to animators and animation directors, and a variety of inspired artists have taken advantage of that over the years. Some of the show’s best visual moments have actually appeared in its expanded or anime-original material, where directors and animators can express visions designed for animation from the start, rather than adapted from still panels. So it goes for Tequila Wolf, the Robin-specific side story that represents one of One Piece’s clear aesthetic heights. With Gou Koga directing and Naoki Tate on animation direction, Tequila Wolf is a feast of both storyboards and animation highlights, feeling uniquely cinematic within the early One Piece canon. Series regulars like Hiromi Ishigami could embrace distinctly non-One Piece styles here, emphasizing the naturalistic movement they brought to properties like Mamoru Hosoda’s films.

Even in the show’s earlier and manga-based material, there’s still room for distinctive interpretations of its visual style. Yoshikazu Tomita might stand as the animator who best elevated the “original One Piece style,” complete with its thin and plentiful linework. Just take a look at this sequence, which feels almost impossible to animate in its roughness of linework, and shares little in common with the eventual Wano style. Or this one, with its uniquely angular approach to character shading. As much as I love Wano, I do miss this aesthetic too — One Piece’s stubbornly thin linework set it apart among action anime, and I doubt we’ll see anything like it again. 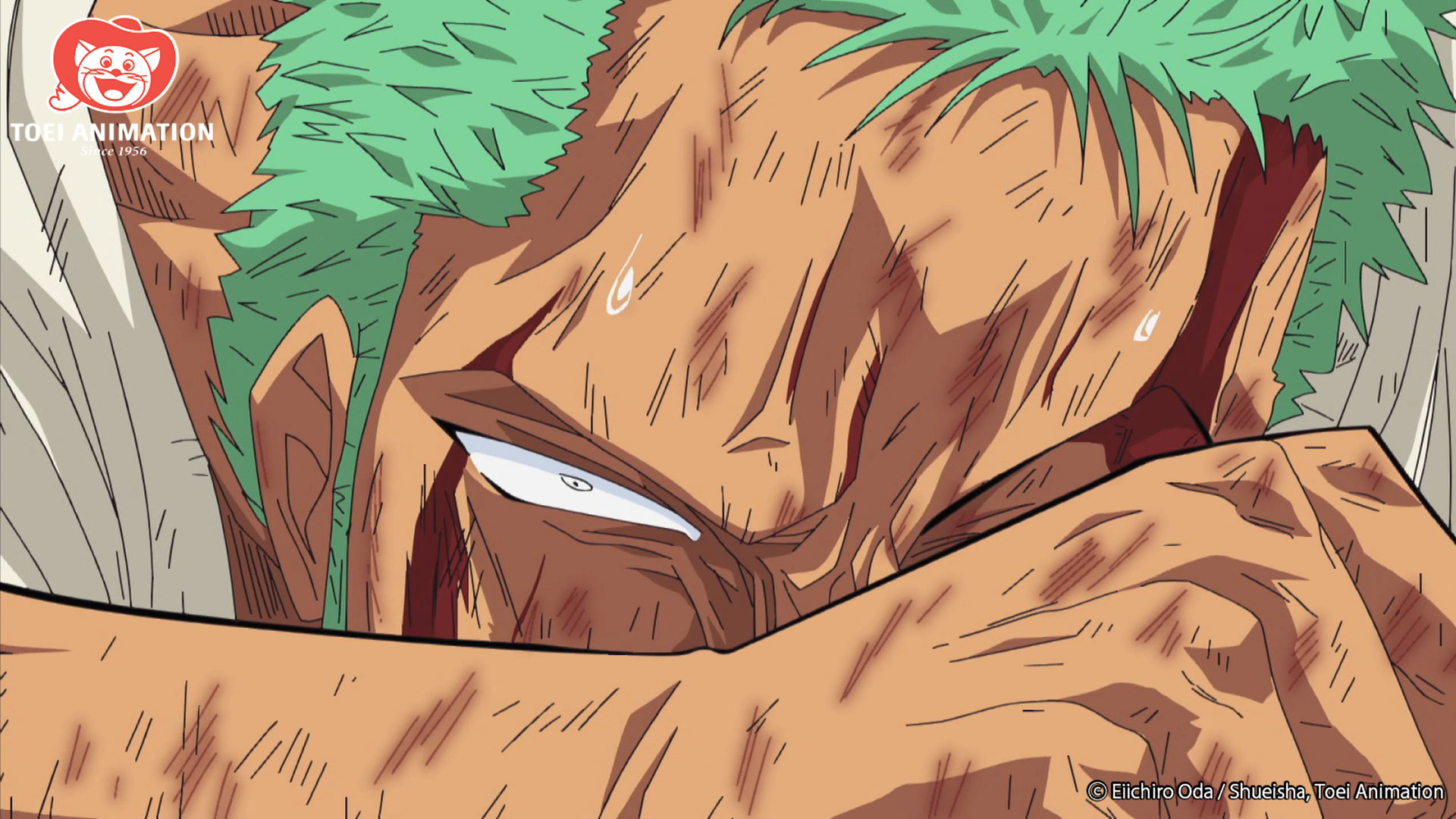 Finally, my own favorite interpretation of One Piece actually doesn’t come from the show proper. Instead, it’s from one of the show’s tie-in films: Baron Omatsuri and the Secret Island. Baron Omatsuri was actually directed by Mamoru Hosoda, who brought a dark and cinematic sensibility to One Piece just before he started directing original films. The film is brimming with compelling experiments in cinematography and digital integration, but its greatest attraction is its absurd character animation. Omatsuri’s roster of ADs and key animators ranges from Gainax stars like Sushio and Yoh Yoshinari, to general legends like Yoshiyuki Ito and Norio Matsumoto. As a result, Omatsuri’s flat-shaded style looks like nothing else in One Piece, dazzling through its expressive character acting and dramatic action scenes.

Ultimately, what is most compelling to me about One Piece’s “aesthetic” is the variability of that aesthetic. The playfulness of Oda’s actual story seems mirrored by the looseness of its visual form, with Oda’s expressive art seemingly inviting artists and animators to find their own approach to its style. One Piece embodies how anime lets individual artistic voices shine within a larger production, and I’m eager to see it interpreted in new ways for years to come. I hope you’ve enjoyed this exploration of One Piece’s evolving style, and let me know all your own favorite versions of One Piece in the comments!