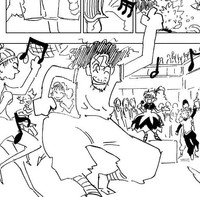 Earlier this month, the announcement was made that Hunter x Hunter volume 34 is due out in Japan on June 26th - only about ayear after volume 33 (which was released in March in English). At the time, there were rumors/speculation that the manga would return to Shonen Jump serialization on the same day. And, now there's a listing to that effect.

The series hiatus chart stands at: