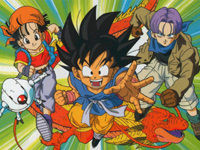 Goku, the hero who destroyed the evil of Frieza, Cell, and Buu in Dragon Ball Z, learns that an old foe, Emperor Pilaf from Dragon Ball has captured the 7 magical Black Star Dragon Balls, which, at the cost of the planet the balls are on, can grant any wish. Pilaf wishes that Goku is a child, and Goku becomes a child. In order to save both the planet and restore Goku to adulthood, Goku must allience himself with Trunks and his grandaughter Pan to find all 7 Balls all over the universe. Over time, they encounter foes like Baby, Super 17, and the invinsible Shadow Dragons.
[Редактировать]
Extended Information
Characters

Gil
After Goku, Pan and Trunks crash-land on a strange planet the lost little robot, Gil, consumes the Dragon Radar as a food source. Because of this, the device is integrated into his system causing him to "become" the Dragon Radar. Prone to malfunction, Gil is usually a coward but will charge into action to protect his friends.

Gogeta
When Goku and Vegeta fuse (as Super Saiyan 4's) the ultimate warrior in the universe is born! With the power, speed, and stamina of both of the Super Saiyans, Gogeta makes his stand as the last line of defence for the entire universe. But Gogeta's strength takes a plunge when Goku's childish body cannot handle the power within! Without Gogeta, could the universe be doomed to annihilation?

Gohan
As Gohan grew up he decided to train his mind just as much as his body. As a result he’s turned into one of the premier scholars on the planet. But wisdom is only useful against some opponents. Gohan soon comes "out of retirement" to join the fracas against Baby in order to save the planet. That is, if he can stay free from Baby's control.

Goku
With Baby and Super 17 destroyed for good, Goku hopes that he may finally be able to call upon the Eternal Dragon to restore peace to Earth. But what Goku got was the shock of his life! The Dragon Balls have changed and given birth to seven evil dragons that begin to pillage the planet! Goku must defeat each dragon if he is to return the Dragon Balls to their normal state, but with each dragon being tougher than the one before, Goku's most dangerous adventure could be his last!

Goten
Goten was meant to join Goku and Trunks on the search for the Black Star Dragon Balls, but an overly eager Pan foils his plan. Undaunted - and happy to be at home - Goten continues his usual laid back way of life. But when Baby interrupts a date with the lovely Valese, Goten readies for battle.

Hercule
With age comes wisdom, at least for some. With Hercule's age comes even more bombastic confidence from the Champion of Earth. With the support of the people, Hercule again finds himself in the thick of the battle. But is there anyone left to bail him out when his loyal fans are infected by Baby?

Kibito Kai
Kibito Kai watched the battle between Baby and Goku from the safe confines of Other World. But the loyal and brave Kibito quickly jumps into action when Goku nears defeat. Kibito is ordered to find the Super Holy Water, a mystical substance that rids whoever drinks it of impurities with the hopes that it might free everyone under Baby's control.

Majin Buu
To say that Majin Buu has been through a lot would be a gross understatement. After being manipulated by weaker beings, Majin Buu has managed to fit in with society through the help of his greatest friend, Hercule. But Majin Buu may soon be called upon to save the very people that he hungered to destroy just a few short years before.

Pan
Pan insists that she join her grandfather on the search for the 7 evil dragons. With Gil and Goku at her side, Pan proves her bravery time and again against the evil forces that her ancestors helped create through a lifetime of wishes.

Piccolo
Long ago Piccolo yearned to unleash destruction and anarchy upon Earth. But as fate would have it, he now faces a monumental decision that he believes will spare the world from further devastation and allow peace to reign forever.

Trunks
Trunks is the current President of the Capsule Corporation, but don't let his new digs fool you. He is still the same Trunks that thirsts for action and adventure - no matter the odds. He volunteers to help Goku on the quest for the Black Star Dragon Balls.

Uub
Uub and Goku train together in an effort to assure that there will be another powerful fighter to defend the Earth if Goku is ever out of action. Uub's pure heart and ‘never-say-die’ attitude makes him the perfect candidate for such an honour. Uub soon gets his chance to put his training to the test against the terrible Baby, eventually joining with Majin Buu to realize more power than he could have ever imagined.

Vegeta
As the battle for the universe rages between Goku and the ultimate evil dragon, Vegeta marvels at how powerful his former enemy has become. Not to be out done, Vegeta survives the intense process of becoming Super Saiyan 4! Vegeta believes that the only way to defeat the evil dragon is to fuse with Goku, setting the stage for the ultimate hero and the ultimate villain to settle things once and for all!

Baby
Baby is the last remaining descendant of the Tuffles, a race the Saiyans nearly wiped out many years ago. With their civilization's destruction at hand, the Tuffles put the soul of a single being into a seed and fired it into space where Dr. Myuu found it. Although Baby was "created" by Dr. Myuu, he definitely has a mind of his own and quickly asserts his own will. Cold, calculating, and bent on revenge, Baby's only goal is the re-establishment of his people and total control of the Universe.

Bies
Nazy, Libetto, and Bies make up General Lock's top mercenary force. They are called upon when Dr. Myuu demands "results." They have the ability to join their metal bodies into an even more powerful soldier, the awesome Sigma Force Canon.

Bon Para
The bizarre Para Para Brothers are sent to find the powerful Black Star Dragon Balls so that High Priest Mutchy Motchy may complete his twisted vision of bringing the Luud Robot to life. Their armour doubles as a boom box, which casts a spell over anyone who hears it, causing them to dance about hysterically. This gives the brothers an advantage in a battle.

Cell
When Frieza and Cell were destroyed Goku believed the villains were gone forever. But he could have never known that he would wind up staring down his old nemeses in the Spirit World! Goku must battle them head on if he is to make his way out. But can even Goku defeat enemies that are already dead?

Nazy
- Nazy, Libetto, and Bies make up General Lock's top mercenary force. They are called upon when Dr. Myuu demands "results." They have the ability to join their metal bodies into an even more powerful soldier, the awesome Sigma Force Canon.

Doru Taki
Doru Taki is a high priest in the Luud cult. When Goku seems to be getting the upper hand, Doru Taki turns everyone present into dolls and feeds them to Luud… including Pan! Doru Taki takes a bizarre liking to the young girl, saying that they will indeed be married when she grows up.

Don Para
The bizarre Para Para Brothers are sent to find the powerful Black Star Dragon Balls so that High Priest Mutchy Motchy may complete his twisted vision of bringing the Luud Robot to life. Their armor doubles as a boombox, which casts a spell over anyone who hears it, causing them to dance about. This gives the brothers an advantage in a battle.

Dr. Gero
The long time adversary of Goku is back in a big way. Dr. Gero and Dr. Myuu combine their twisted brilliance to create a new Android 17. Gero needs Myuu’s expertise to help finish his ultimate artificial killing machine and to open a gateway between the Spirit World and Earth.

Dr. Myuu
Dr. Myuu is a brilliant scientist who desires nothing more than total control of the galaxy. Dr. Myuu masterminds the plot to build an ultimate Machine Mutant with enough power to see his sinister goal of control through to the end. Dr. Myuu was also responsible for the creation of his powerful enforcer, General Lock. Subject to outrageous bursts of maniacal laughter, Dr. Myuu is cold and unloving, except towards Baby.

Eis Shenron
The Dragon of Ice, Eis Shenron, is Nova Shenron's brother. Eis Shenron joins the fight against Goku and even has him down and beaten. Just as the Dragon Balls have turned against their masters, Eis Shenron may find

Frieza
When Frieza and Cell were destroyed Goku believed the villains were gone forever. But he could never have known that he would wind up staring down his old nemeses in the Spirit World! Goku must battle them head on if he is to make his way out. But can even Goku defeat enemies that are already dead?

General Lock
General Lock is the top officer and administrator of "Planet M2," the mechanical world that serves as Dr. Myuu's base of operations. Rilldo's sole purpose is to bring the Saiyans and Dragon Balls to Dr. Myuu. But when his volatile temper rises the already powerful General Lock transforms into the metal-clad warrior, Meta-Rilldo. In this state he can control metal, making him a formidable enemy on a mechanical planet.